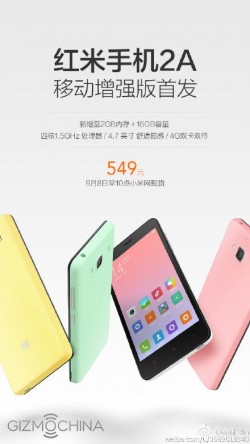 Xiaomi CEO Lei Jun has announced a new version of his company's Redmi 2A smartphone model. The new, enhanced Redmi 2A will go on sale in China tomorrow.

Compared to the previous iteration of Xiaomi's cheapest device, the new Redmi 2A will be almost identical, save for two pretty important upgrades. Whereas the original model comes with 1GB of RAM and 8GB of storage, the new one will double both of those.

Otherwise, the new Redmi 2A will share its specs with its predecessor. It will have a 4.7-inch 720p touchscreen, an 8 MP rear camera with LED flash, a 2 MP front-facing unit, the Leadcore L1860C chipset with 1.5 GHz quad-core CPU, 4G LTE support, dual-SIM functionality, and a 2,200 mAh battery. Although this hasn't been confirmed, we expect it to run MIUI 6.0 based on Android 5.0 Lollipop just like the original Redmi 2A.

The only difference is in the amount of memory you get, both RAM and Internal Storage gets doubled in the new version. That's it.