US Cellular and Verizon to also offer the Samsung Galaxy S4

US Cellular and Verizon will be the joining AT&T in carrying the upcoming Galaxy S4. The former has even put up a preorder page for the smartphone, so that those who are interested can sign-up for instant updates on its availability. 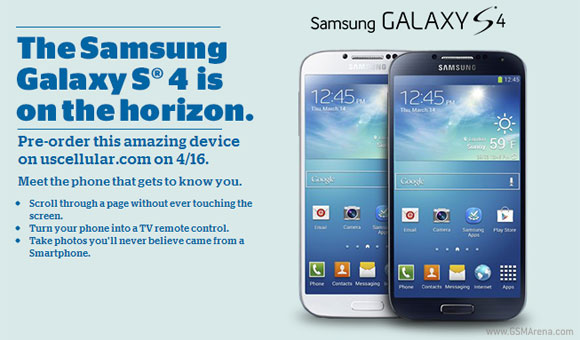 Samsung's flagship is also going to land on Verizon's LTE network, as FCC's kindly informs, utilizing the 700MHz and AWS frequencies. Additionally, the Galaxy S4 for Verizon will also sport a 3G radio, meaning it's going to be usable outside US borders, too.

As you know, the US is getting the Snapdragon 600 variant of the Galaxy S4, so don't get your hopes up on an Exynos 5 Octa version being offered by any of the aforementioned carriers.

The CDMA version of the Galaxy S4 isn't yet clear on neither availability, nor pricing for the carrier duo, but we suspect it should be some time at the end of April. That's when the international version of Samsung's latest and greatest is bound to become available.

Yep, access to every streaming service in the world, but no FM is obviously a deal breaker.

WHY do people make senseless comments on just about anything, baiting ??? for your info, Samsung released their first watch phone in 1999,,, I'm not even going to provide a link, go do your own research and stop hating so much ;)

So what day will it be available in stores?