The HTTP user agent profile of a new LG device has surfaced online, revealing the model number it carries and the OS it runs. As you can see in the screenshot below, the model number of this new handset is LG-H830. 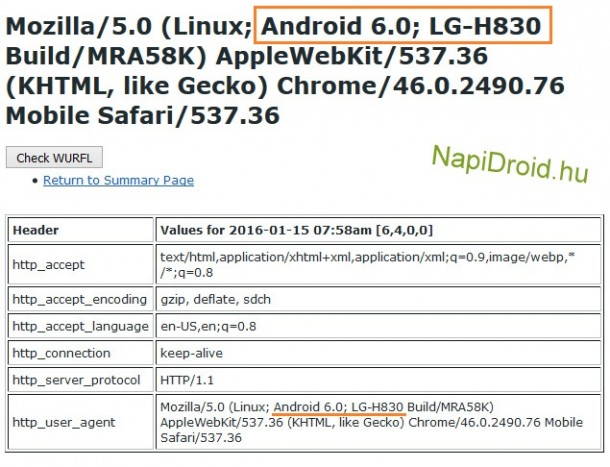 Given the fact that LG's G4 flagship carried LG-H810, LG-H811, LG-H812, and LG-H815 model numbers, it's safe to assume that the new smartphone in question is the company's upcoming G5 flagship smartphone. In addition, the profile also revealed that the device runs Android 6.0 Marshmallow.

The LG G5 has already been the subject of several leaks and rumors until now, revealing its possible design and specs. The device is expected to be made official at LG's pre-MWC press event on February 21, invitations for which have already been sent..

Lg g2 was the best that lg ever made. They should have just refined this moster flagship,improve on the cons and it would have been the perfect smartphone

User which a revealed these information is agent undercover gsmarena ?..)

Could not agree more.. huge battery and LG G2 size packed with technology at a deacent price.