After Microsoft took over Nokia's devices business we felt we'd never hold another Nokia device again. But as it turned out the company wasn't done. It's not exactly clear how much of Nokia there is in the Nokia N1 but after handling it we feel reassured that this is indeed a product of the quality-driven Finish brand we know and love. 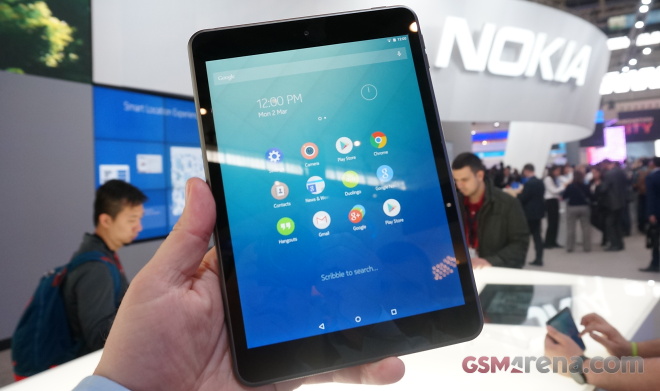 The Nokia N1 launched in China solely while the rest of the world is aching to see the low-cost high-end slate launch elsewhere. However the Nokia rep we talked to assures us that the Nokia N1 is coming to Europe - so here goes a sneak peak at what to expect.

The Nokia N1 is not your average Nokia device. For starters it runs Android - but not a fork - it's Google's Android. The slate uses Nokia's own Z Launcher (the one available from the Google Play store to other devices) tailored for tablets and everything sits on top of stock Android 5.0.2.

Performance is snappy as you can see in the video below.

While handling the Nokia N1 we couldn't escape the reference to the Apple iPad mini. The Nokia N1 is very similar with an aluminum unibody, the same 7.9" display of the same aspect, along with the identical 1536 x 2048px resolution equaling the same 324ppi sharpness. The display is also fully laminated, meaning there are no layers or air between the surface of the glass and the display itself. This should give it better contrast and viewing angles.

We can say that the Nokia N1's display is great. The panel is sharp and colorful. It's also impressively bright. We'd need to put it side by side with a retina iPad mini before we can say which is better but we left the booth impressed.

The aluminum body of the Nokia Lumia N1 feels premium and well made like the iPad mini 2 and 3 but doesn't feel the same. It feels as if the Nokia N1 is lighter but not as thin.

Still securing the device in one hand is easy enough and we could easily use it this way - with one hand free to navigate the display. Android really sets the Nokia N1 apart from Apple's compact tablets and one thing that reflects this in the most prominent way are the on-screen buttons that pop up wherever you need them, contrary to the iPad's stationary physical home button.

Another aspect of Android that separates the N1 is customizability. Nokia preloads its Z Launcher to the N1 but you can always install Google's own launcher or any other you like.

Powering the Nokia N1 is a 64-bit Intel Atom Z3580 with four 2.3GHz cores, 2GB of RAM and the PowerVR G6430 graphics chip. We'd really like to test it against the best tablet SoCs out there - the Apple A8X and Nvidia's 64-bit Tegra K1 but we weren't allowed to perform benchmarks. But we'll remedy the situation as soon as we get our hands on a final Nokia N1 tablet.

Nokia wasn't clear about the price of the N1 once it comes to Europe but we'd wager it will be slightly higher than the $260 price in China.