The LG Intuition has been off in rumor land for some time, but that’s no more - it was officially unveiled today by Verizon. The phablet looks exactly like its international sibling but has a few extra tricks in its bag of features.

The LG Intuition features a 5-inch IPS XGA 650-nit bright display and runs on a 1.5GHz dual-core processor. There is still no info on the chipset, but we hope for a dual-core Krait with Adreno 225 GPU instead of the Korean Optimus Vu’s dual-core Scorpion and Andreno 220 GPU duo. By the way we've already met with the latter and you may check our encounter with it right here. 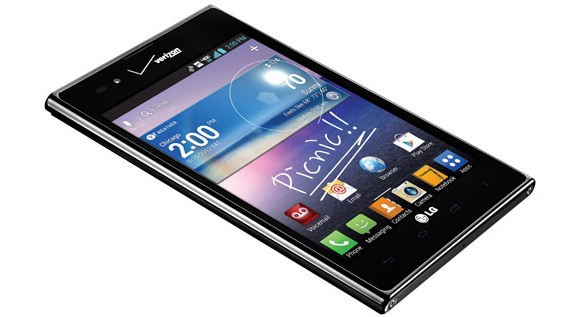 Verizon will released the LG Intuition on September 6 and it will cost $200 with a 2-year contract. If you made a purchase between Sept. 6 and Sept.10 you’ll also get the LG Tone Stereo Bluetooth headset for free.

Also announced by Verizon is the Samsung Galaxy Stellar - an LTE-enabled mid-ranger for first-time smartphone users. It uses the same two homescreen modes we already saw in the Jelly Bean ROM for the Galaxy S III.

The Galaxy Stellar utilizes a 4-inch WVGA capacitive display, a 1.2GHz dual-core processor (no info on the model yet), a 3.2 megapixel camera, a microSD card slot, Wi-Fi, Bluetooth and LTE connectivity.

Verizon will launch the Galaxy Stellar on September 6 as well, and will go free with a mandatory 2-year contract.

What good is the Note when you cant use it on At&t's poor network!

what! another samsung and lg phones!