Verizon Galaxy Nexus to sell for $299.99 on two-year contract

The Verizon Galaxy Nexus rumor train is going at full speed. Today we got a new story about the pricing of the Android Ice Cream Sandwich pioneer on the big red US network.

Wall Street Journal has it that, despite earlier rumors pointing at a $199 price tag on a contract, the Galaxy Nexus will cost $299.99 as initially expected. That's the kind of price that gets you an HTC Rezound, which carries a specs sheet quite close to that of the Samsung new flagship. 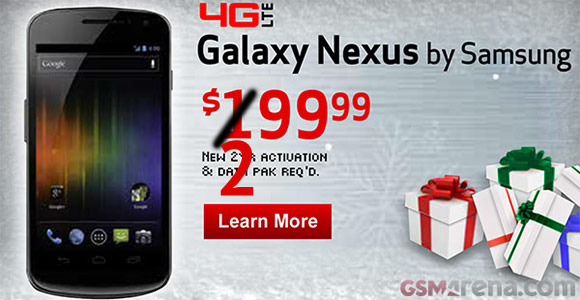 The new information is said to come from people close to the matter, but the source doesn't get any more specific than this. Unfortunately we weren't provided with a target release date either, so we'll have to wait a little longer to see if the "this Friday" rumors are correct.

We are sure many of you are eagerly waiting for the saga to end and the Galaxy Nexus to hit the Verizon stores as it'll make a great present, so we'll keep you updated as soon as new info comes up.

What are the clauses of contract? Will not work outside the US? or not on Verizon?

what made you think MP = clearer picture? MP mean the size of a photo. not how clear it will be.