Bear Grylls might currently be off-air, but he came back to brings some awesomeness to Verizon's latest tough smartphone - the Kyocera Hydro Elite.

Hydro Elite, as the name suggests, is an IPX7-certified water resistant droid. It can last for up to 30 minutes under a meter of water. 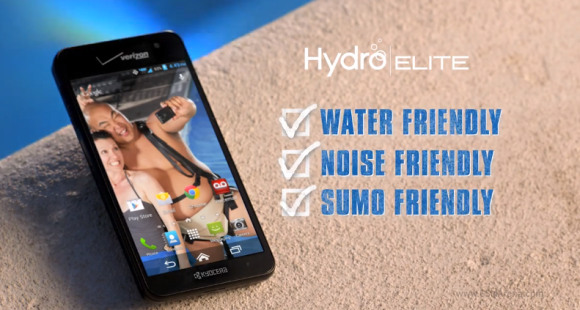 Other than water protection, the Kyocera Hydro Elite comes with a 4.3-inch 720p display and runs on a dual-core 1.2GHz processor. The rest of the specs include an 8MP rear and a 1.3MP front cameras, NFC and LTE connectivity, and a 2100 mAh battery.

The Hydro Elite runs on Android 4.1 Jelly Bean with some proprietary skin from Kyocera. The gadget is promoted by Bear Grylls, so in addition to the water-resistance you'll also get the famous adventurer's seal of approval.

The Kyocera Hydro Elite launches on Verizon tomorrow and costs $99.99 with a two-year contract.

Yes yes yes now make another version running on the latest android with quadcore 2,3 GHz CPU (like HTC One MAX), 2MP front camera and 2160p video @30fps (not really neccessary, just nice), 4GB RAM, wireless charging and the USB 3.0 port and you got u...

Kyocera Corporation (京セラ株式会社 Kyōsera Kabushiki-gaisha?) is a multinational electronics and ceramics manufacturer headquartered in Kyoto, Japan. It was founded as Kyoto Ceramic Company, Limited (京都セラミック株式会社 Kyōto Seramikku Kabushiki-gaisha?) in 1959 b...