In mid-April a then-unnamed LG Windows Phone headed to Verizon got the leaked press render treatment. In the meantime, we found some confirmation that LG is in fact getting back into the Windows Phone realm on the Korean company's own website, and now we know what its upcoming device will be called.

Verizon will sell it as the LG Lancet, and it will launch running Windows Phone 8.1 Update 2, and not Windows 10 for phones. This might mean the Lancet is due for release soon, as the mobile version of Windows 10 is probably still a few months away. 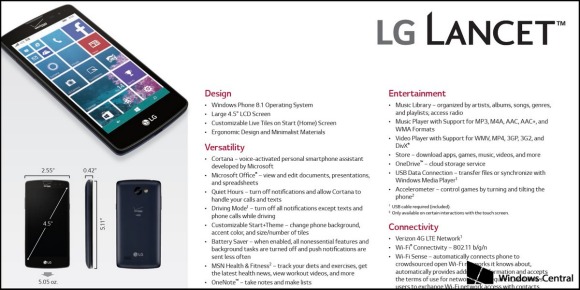 Thanks to some leaked promotional materials for the Lancet, we have a good idea of what to expect in terms of specs. The handset will sport a 4.5-inch 480x854 touchscreen, an 8 MP rear camera, and a VGA selfie snapper.

It will be powered by the Qualcomm Snapdragon 410 SoC, featuring a 1.2 GHz quad-core CPU. Internal storage will be 8GB (of which half should be user-accessible), though you'll be able to extend that with a microSD card. Keeping things running smoothly will be a 2,100 mAh battery.

RAM amount isn't mentioned in the official spec sheet that got leaked, but given the rest of the internals here we're thinking it will be 1GB. Interestingly, LG is set to borrow some software features from its Android smartphones for the Lancet.

Hence, we'll see KnockOn (double tap to wake or sleep), as well as Soft Light and Gesture Shot for the camera, which let you take selfies with an illuminated screen or a hand motion.

Some of them. Besides it works for people who like to live on credits. Not everyone can buy $1000 phone up front.

Is that so? Can we buy the phone without subscribing to their plan, though?

8gb not suffient, after update you get half the storage. atleast 16gb is required_sd-card.