Vertu has finally unveiled a new luxury smartphone today, and it's the latest to be branded Constellation. Oddly for luxury mobile devices, this one comes with actual high-end specs, as well as dual-SIM functionality (the latter being a first for Vertu).

The new Vertu Constellation has a 5.5-inch QHD AMOLED touchscreen, a 12 MP main camera with 1.55um pixels and 4K video recording, the Qualcomm Snapdragon 820 chipset at the helm, 4GB of RAM, 128GB of expandable storage, NFC, a USB Type-C port, and a 3,220 mAh battery with support for wireless charging. It unfortunately runs Android 6.0.1 Marshmallow, with absolutely no mention of an upcoming update to Nougat - so don't hold your breath on that one. Then again, the average Vertu buyer probably couldn't care less about such things. 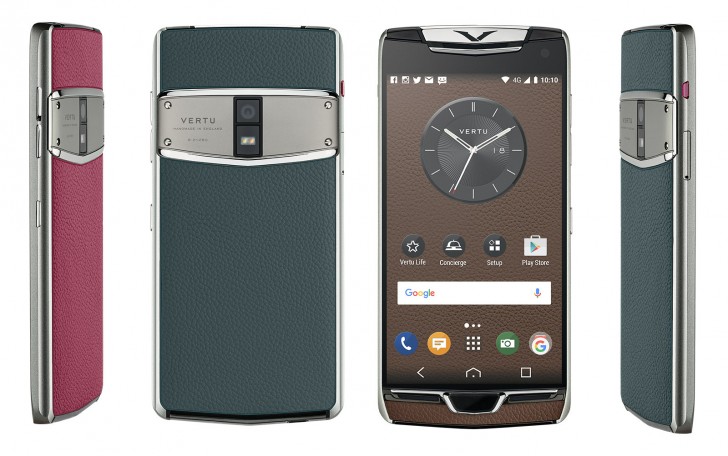 Vertu says the Constellation's display is protected by "a solid section of scratchproof, 140 carat 6th generation sapphire crystal". The handset has front-facing stereo speakers, and "exceptional acoustic performance is achieved with Dolby Digital Plus virtual surround sound processing". The device will be hand-crafted in England from anodized aluminum and finished with leather "sourced from a specialist, family-run tannery in Italy".

Vertu's famous 24-hour concierge service is available on the Constellation too, and you access it by using an inset ruby on the side of the phone, since that also doubles as a button. Additionally, buying the new Constellation gives you access to iPass, the world's largest Wi-Fi network.

The new Vertu Constellation will become available "in boutiques" from mid-February, but the company hasn't announced how much it will cost. This is Vertu though, so don't expect anything under four figures.

Hii I had 2 phones from vertu different models but I regretted because I paid a lot on device which doesn't worth. first of all I don't understand vertu why they don't step forward and I wont get shocked if this company will close after couple of...

well, it more appropriate for you..