What can I help you with? Hope your day is going well. It's a start. But it'll take time for the likes of Siri and Google Now to live up to the Intelligent Personal Assistant title. Surprisingly, intelligent isn't too far off for software that's context and location aware, does speech recognition and has an impressive backend of resources and services. Personal? Well, Google obviously knows who you are, where you are and what you've been up to lately. Yet, we'll stick to calling them virtual for now.

Assistant then is perhaps the trickiest bit. So it seems. And the question is (barring scenarios where your hands and eyes are busy with something else) whether we really need to do by voice what can be done at the click of a button - ok, a few buttons. And if it's info and content, can we not just Google it instead of having Google Now do it for us? 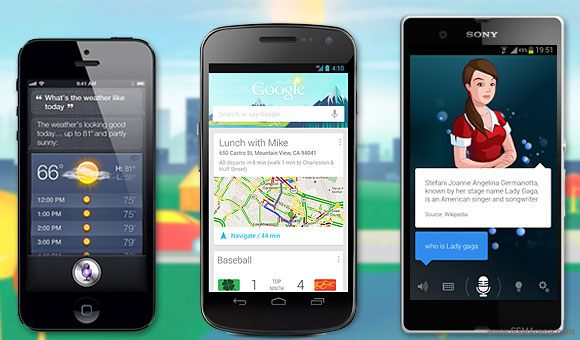 Anyway, things like Google Now and Siri are but a taste of what your smartphone can do for you. There's plenty of potential there and Apple and Google are hopefully looking beyond the launching of apps, personalized and localized search and voice typing. Not least because the hardware race isn't going to go on forever.

What you are experiencing isn't some sort of a strange deja vu. We had a similar comparison indeed on our blog, but it was well before Google Now and iOS 6 (and the improved version of Siri that came with it). Samsung's S Voice had just launched on the Galaxy S III but, honestly, the experience was less than perfect. It was more of a see-Apple-we-can-do-it-too kind of thing. Google Now has now taken over and is available on every single Android smartphone with Jelly Bean. Not only that, it's very much a part of Google's long-term plans.

Anyway, a few months ago we were less than impressed with the three different pieces of software. Slow to respond, and sometimes blatantly wrong, the virtual personal assistants just weren't up to scratch.

However, since users aren't best known for lowering their expectations, the software has evolved to offer new and better features. So, we're about to look beyond the big change logs and get some real action.

We are going to see what new tricks Apple's Siri, Google Now and Speaktoit have learned and how they can be of use in our everyday lives.

The tasks at hand are going to be as close to real-world scenarios as possible. A weather brief in the morning, pending appointments and other calendar events, the latest news, warning about flights being delayed and checking available seats for our movie of choice for the evening. These are all an essential part of an assistant's resume.

I totally agree. There’s only so much you can accomplish by yourself without feeling overworked or pressured. If you are a busy professional, and need a virtual assistant then check out dailyPA.co.uk

I uninstalled S voice or whatever it was called from my S3. Just pretty useless really.

google now is awesome its amazing how well they made it so good after siri came out and goole now has bested siri in no time...