A previously unheard of vivo phone has been spotted on GeekBench - the vivo 1817. The existing vivo Y93 goes by v1818 internally, and the new model appears to be similar to that, minus one - it's certainly got 1GB RAM less than the Y93 base model's 3gigs. 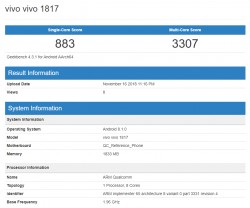 One of the vivo v1817 entries on GeekBench

The vivo 1817, which will inevitably get a more marketable name when it goes official, is powered by a Qualcomm chip with an octa-core CPU, and it's likely the Snapdragon 439 you can find in the Y93/Y95 models. The 1817 also runs on Android 8.1 Oreo like its Y brethren.

So far that's all the popular CPU benchmark reveals - we'd be so much happier if it started reporting display size and battery capacity.

Well with price around 80 euros it should be great othervise not reccomend.

I guess you haven't heard of the Nokia 2.1 which came in mid 2018. It has a whopping 1GB of ram! 2 gigs should make people who use everyday social apps happy, though. Not everyone is a hardcore gamer, or a person with 70+ open tabs on their br...