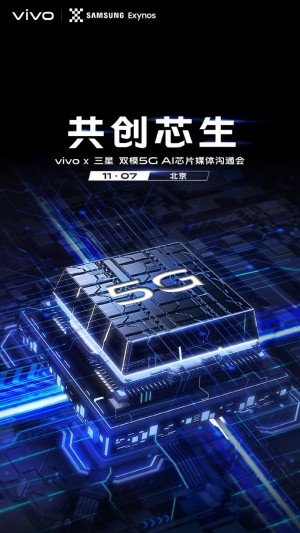 Samsung announced the Exynos 980 chipset with a 5G integrated modem, and while it was introduced as first in the world, we are still waiting to see a smartphone with it. The Chinese manufacturer vivo revealed that a phone is on the way and tomorrow, November 7, the two companies will hold a joint event in Beijing.

Samsung built the platform with two Cortex-A77 cores in the CPU and six Cortex-A55 units and a Mali-G76 MP5 GPU. Having an integrated 5G modem is both cheaper to produce due to simplified motherboard and more power-efficient, so the vivo X30 should be at an advantage compared to most of its 5G rivals.

Earlier this year, we saw some renders of a venue that is going to be the launch scene for the vivo X30. We expect to see a notchless display and three cameras on the back in the upper left corner. Actual market availability might take until December though.

No, they are moving away from custom arm based mongoose cores to standard arm cores

I don't care if it's their design or ARM's design, bring on true 5G(SA)+WiFi 6 chip and take my money. I was THAT close when I decided to buy the Mate 30 Pro 5G but hesitate because of lacking WiFi 6 (I saw huge speed difference vs WiFi 5 with my WiF...

Why do people not understand Mongoose was based on ARM? It was slightly faster A73 cores, true the A75 is faster and so is the custom A75 of Qualcomm named Kryo but for what it was actually a better core... Its only that A75 is better! :<