It's not every day we handle a dual-screen phone, so we were quite thrilled to have the vivo NEX Dual Display Edition in our hands. Sure, we wouldn't have picked this name for the handset, as it's pretty much a nightmare for both users, PRs, and media, but we hope vivo knows what it's doing here. 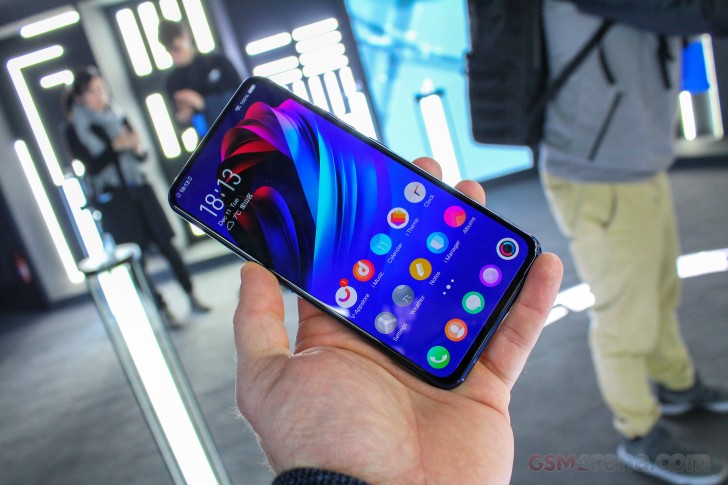 Anyway, as you can imagine, the Vivo NEX Dual Display is a dual-glass smartphone through and through. It has a to-be-confirmed type of protective glass at the front and a Gorilla Glass 5 piece on the back. Both have a subtle 2.5D finish, which does improve the looks but ruins the grip. 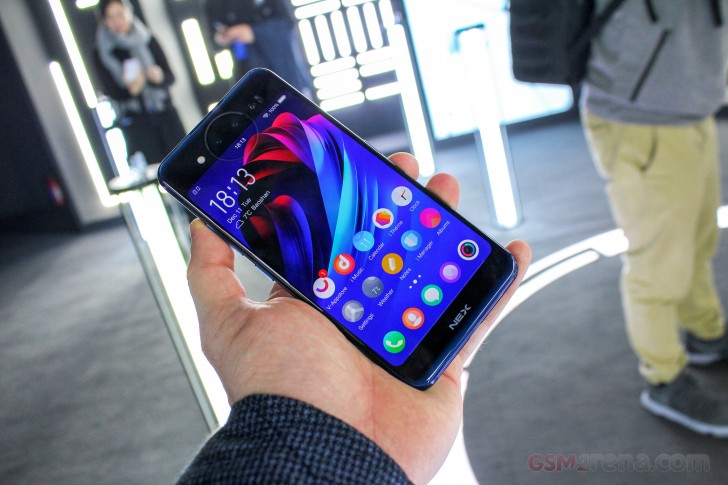 An aluminum frame holds everything together, and it's as glossy and slippery as it looks. We found ourselves using the bumper case almost immediately, as the vivo NEX Dual Display Edition is possibly one of the most slippery phones we've handled to date.

The whole front is occupied by a 6.39" Super AMOLED screen of 1080p resolution. The aspect of the screen is 19.5:9 - among the widest available today and the pixel density adds up to 403pp - quite enough although not the best.

There is an under-display fingerprint scanner around the bottom and this is one of the secure ways to unlock the NEX. At least on this side of the phone. 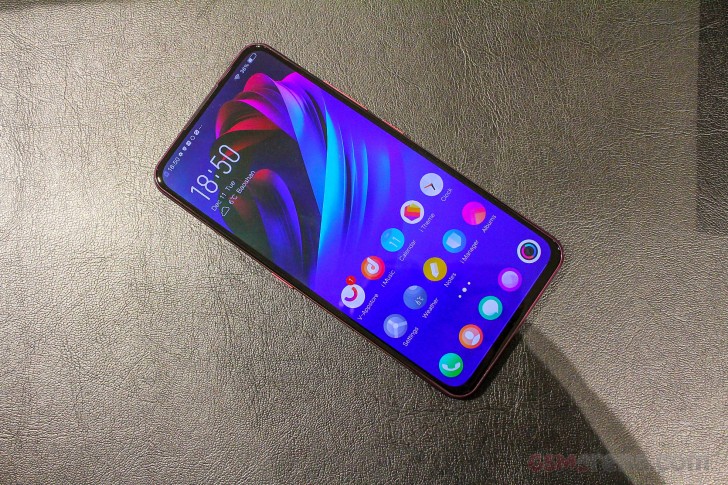 There is a TOF camera and an IR-illuminator at the back and it's capable of reading a total of 300,000 points at up to 3 meters. That's 10 times more points than Apple's TOF camera, which can do readings at a distance of up to 1 meter. And similarly, if you use the Face Unlock at the back, the NEX will light up its rear screen until you decide to switch.

You have to wonder how the phone would know which way you'd want to unlock it, right? Well, there are two power buttons, so it depends which one of those you've hit. Not the best decision, but hopefully once you get used to it - you won't be hitting the wrong one all the time.

The sides of the red NEX with the two power keys

Back to the front. If there are some proximity or ambient-light sensors here, they are well hidden underneath the screen panel. The tiny black frame is pretty much as thin as on the iPhone X - the screen ends just before the 2.5D curve starts, which makes it a bezel-less one, though it doesn't bend as Samsung's Infinity ones.

The earpiece is on both sides

The earpiece is very thin, and it's etched between the screen glass and the frame. On both sides of the phone. As per the official word - you will hear it on the side from which you initiated the call, but we suspect vivo has installed just one speaker in there and has positioned it well enough for you to hear it on both sides.

Now, moving on the rear side. The 16:9 5.49" screen is here, still an AMOLED one and still of 1080p resolution. The triple camera is above the screen and it has one 12MP snapper with f/1.79 lens and 4-axis OIS, a secondary 2MP snapper with huge 2.9µm pixels to help in the vivo's new Night modes for both pictures and videos. Finally, there is the TOF camera and the IR illuminator for Face Unlock and AI selfies. 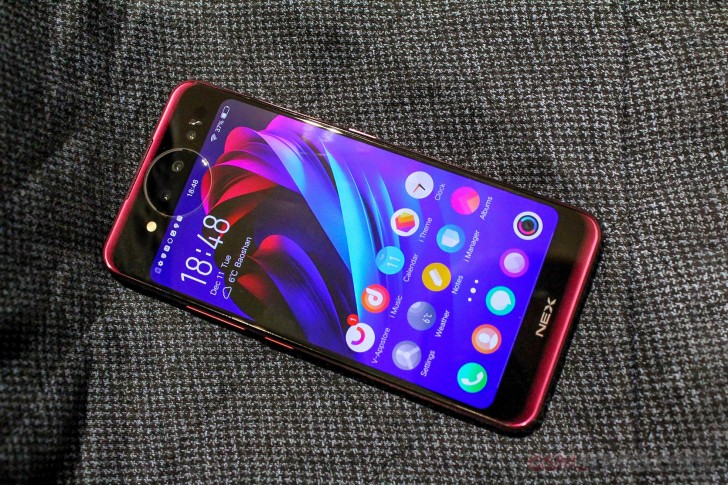 There is this thing called Lunar Ring on the upper part of the display. Next to it is the LED flash, which is used when you are using the front screen and taking regular pictures. For selfies, there are two soft lights embedded into this Lunar Ring near the display, and a small LED strip under its top curve. 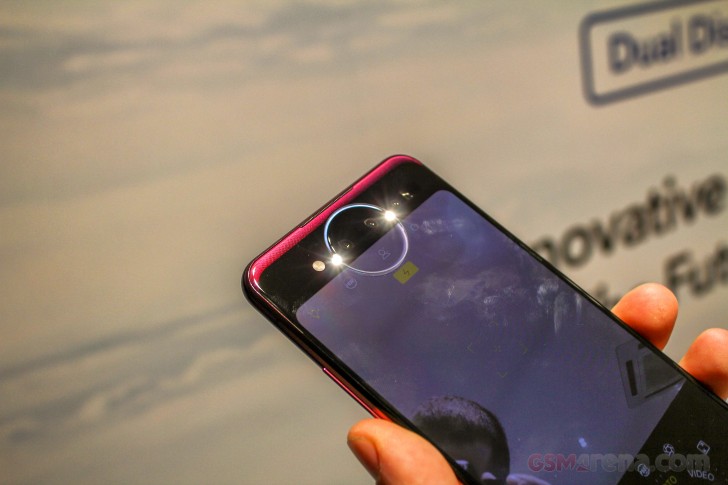 The ring spreads on the display, too, and vivo says it's for design purposes. The display isn't really separated, it's just the glass makes it look this way. And vivo makes use of this "virtual break" by adding various flashy effects for notification or some settings in the camera viewfinder when you are snapping selfies. 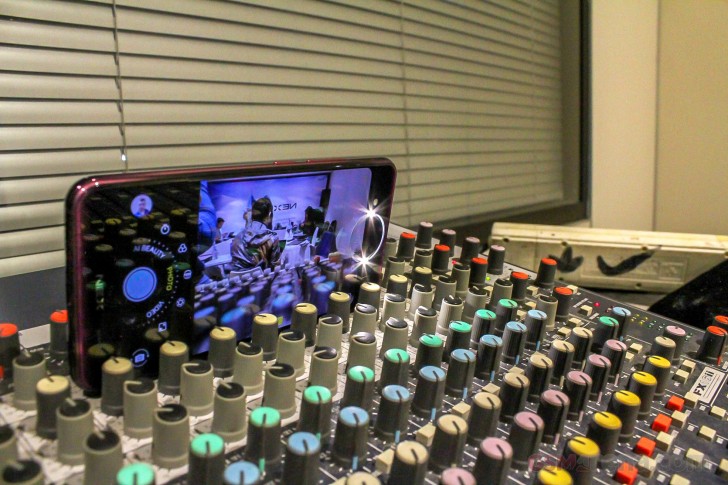 So, by now you should have figured that when you are taking selfies - you use the rear screen as a viewfinder. For regular photos - the front one. You can enable both screens while taking a photo - Mirror Screen - so the subject can see the framing as well. Another feature of the Mirror Screen is Pose - it lets you display a Pose (plenty of presets available), so your human subjects can emulate them. You can even display videos for lip-syncing. 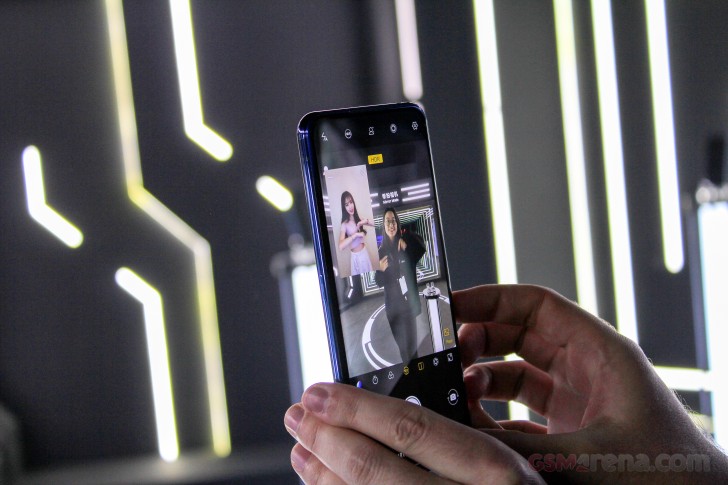 By the way, AI selfie is available - your face is scanned with the TOF camera and you can adjust your facial features for all future selfies. This is not a new thing on vivo phones, but now it will be much more convenient and precise.

But the rear screen can be more than a viewfinder or acting as the main screen. Vivo has made possible for all landscape-oriented games to use it as a controller - they can use the touch panel on the back and lose all virtual controls at the front. This way you can enjoy the full screen and play like on those handheld PS Vita consoles.

Unfortunately, we weren't able to test this, but vivo promises that all games can work with it. We can't wait to try it!

And while we are still on those two screens - those can be always-on as well - one or both of them. There are dedicated options for this and you can choose what happens and what's displayed. We'd imagine opting for both would be a massive drainer for the 3,500 mAh battery, but hey, at least it charges blazing fast with that 22.5W charger.

The vivo NEX Dual Display has a 3.5mm audio port at the top, while its USB-C port, loudspeaker, and dual-SIM slot are all at the bottom.

The new NEX phone is available in two colors - Blue and Red. As you can imagine the hues are sprayed only on the frame, as the rest is mostly screens. Vivo still added some fading accents on the back panel on the shorter side. And if you put the provided bumper, you won't lose the matching effect with those accents. Nice! 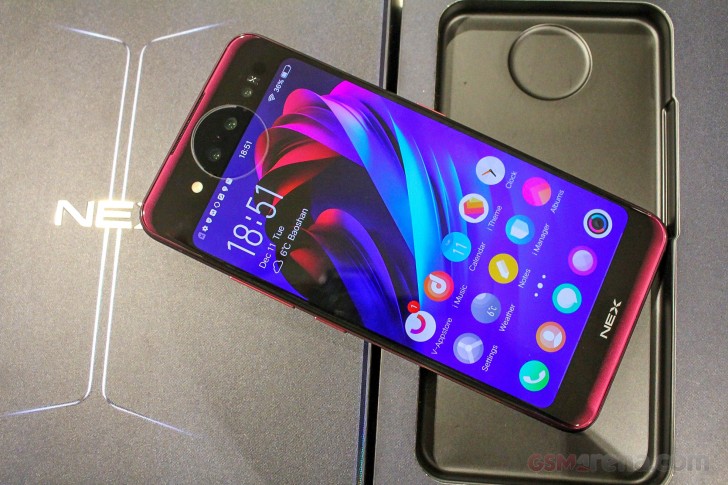 Handling and operating the vivo NEX Dual Display Edition (that name!) is a pleasure, but a very risky business. It's incredibly slippery, so using the bumper is a must. Sure, it's not as flashy as the polished aluminum frame, but it's safer this way.

The red NEX Dual Display and its bumper case

The vivo NEX Dual Display Edition is already up for pre-order in China and it will ship on December 29. It's priced at CNY 4,998 ($720). More countries should get it starting next year. 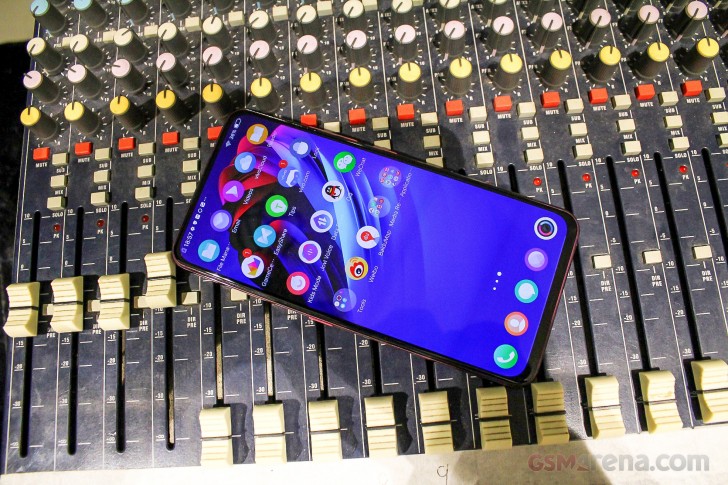 From the limited time we had with the NEX, we liked it a lot. It's a breath of fresh air among the rather boring flagships, and you can easily tell its second screen is not just a gimmick - it's as powerful as the main one, if not more. Sometimes we found ourselves wondering which one to use this time. 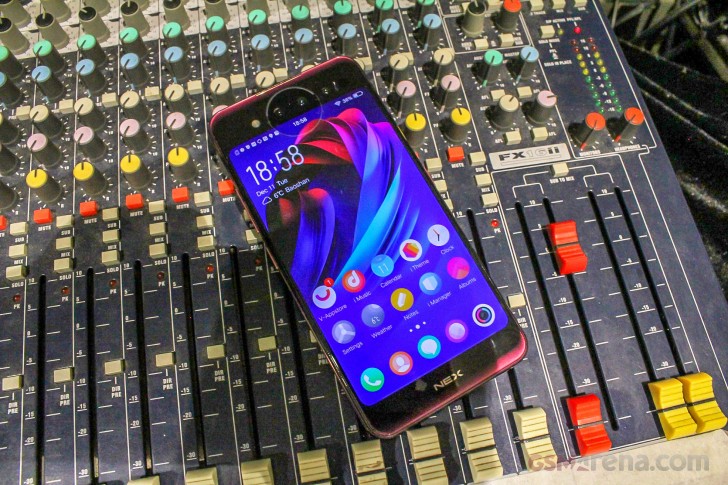 It's a rarity to experience something this new nowadays, and we are glad vivo brought that thrill back. And we are eager to get our hands on the NEX for a full-blown review.