vivo NEX S in for review

vivo Android In for review

Phone evolution is rapid - blink, and you’ll miss it. The top bezel, for example, was so thin, when the Galaxy S8 was introduced. It transformed into a cutout with the iPhone X, became smaller with the Huawei P20 and finally disappeared completely with the launch of the vivo NEX series. Okay, we may be oversimplifying the screen bezel evolution, but there is no denying, we live in exciting times.

The vivo NEX S was introduced last week in Shanghai along with the more affordable NEX A. The top-of-the-line model has a periscope camera popping out of the top rim, an impressive Super AMOLED display, and a cool under-screen fingerprint scanner. Here are our first impressions before heading out to complete the full tests and the review. The NEX S comes with a big 6.59” screen that has an 86% screen-to-body ratio, although vivo would have you believe it's over 91%. The phone might look huge, especially with its 162 mm height, but it does not feel huge. The manufacturer did its best to provide a one-hand experience and managed to do it with an extraordinarily tall screen with 19.3:9 ratio. The NEX S is the first true vivo flagship with a Snapdragon 845 chipset and 8 GB RAM. There is no microSD slot, but the phone offers 128/256 GB internal storage. We are yet to proceed with the usual benchmarks, but we don’t have any doubt it will be on par with other flagships with the same Qualcomm chipset.

The Funtouch OS 4.0, based on Android Oreo, is heavily modified and arrives out of the box with three lines as control keys. They act differently when swiped in a different manner, but you can switch to the regular Android buttons from the Settings menu if you can’t get used to some of the gestures. Vivo spent plenty of time at the launch event talking about Jovi, its new AI assistant, and we get why the company is so enthusiastic about it. Having an artificial platform to help you around puts you right next to companies like Apple and Samsung, and this is what manufacturers from China strive for anyway.

For now, Jovi cannot do much outside of its ecosystem, but in a private conversation after the event, vivo officials confirmed it would eventually work with third-party apps. 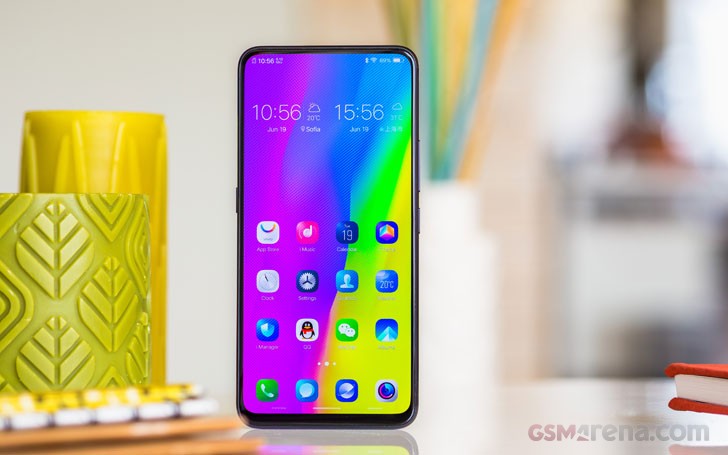 The NEX S is a phone that went from concept to mass production without losing its highlight feature, and we have to give vivo credit for that. The phone also has plenty of impressive features that can put it right next to every other flagship if it manages to go global. With hope in mind, we are heading out to continue with the full review - look for it at our homepage sometime next week.

Nice review, but it should be in Chinese for Chinese readers. No Google Play Services, no go for non Chinese speakers. I mean, what is the point? It is sad that English speaking residents in China are not able to buy any Chinese brand phone with prei...

How many times can the hidden camera popup? Can Vivo claim the durability with advertisement?

Yes exactly! There seems to be much room for manufacturers to skew or exaggerate the screen-to-body ratio. What a new term we have haha. The first time I read "screen-to-body ratio" was an article about a Sony Xperia Z series. They sure haven't...