Vivo teases X6 today, instead of the Xplay 3S successor

Vivo was expected to unveil the successor to the Xplay 3S today, instead the company offered a teaser – an image of a gift box with X6 on its lid. There's not much else about this new device, except that it will focus on four things: stability, speed, battery life and durability.

This more or less lines up with what we've been hearing about the Xplay 3S, it may just turn out to be a case of mistaken identity.

The rumor mill paints an impressive picture, though don't trust it fully. If the rumors are correct, the Vivo X6 will somehow fit a big 4,000mAh battery inside a 4mm chassis. The phone is expected to have a Nexus 6-like 6" QHD AMOLED display with Force Touch. 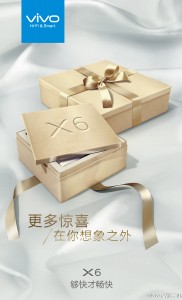 As for speed it will allegedly come with MediaTek's 10-core Helio X20 chipset and 1GB of dedicated video RAM. All current split one pool of RAM between the CPU and GPU, so the X6 could be a pioneer. A 21MP main camera and 12MP selfie camera are also in the cards.

Vivo will reveal more info about the Vivo X6 to its Weibo followers in the coming days, seemingly culminating in a November 9 announcement. The fate of the Xplay 3S is not clear.

I'm not an Apple fan and no, Apple was not in my thought in that comment. LOLZ! But you're spot on. Yeah, everything should be optimized. No matter how fast your hardware is, if either your OS or your UI lags, it will be useless. BTW, I'm also ...