The vivo X23 is still pretty much a mystery and we have nothing solid on it. We just heard about vivo X21's successor yesterday from the most unusual place - vivo's own Jovi smart assistant. According to Jovi, the handset will arrive on August 20 although, it seems way too early given the limited information that has leaked. 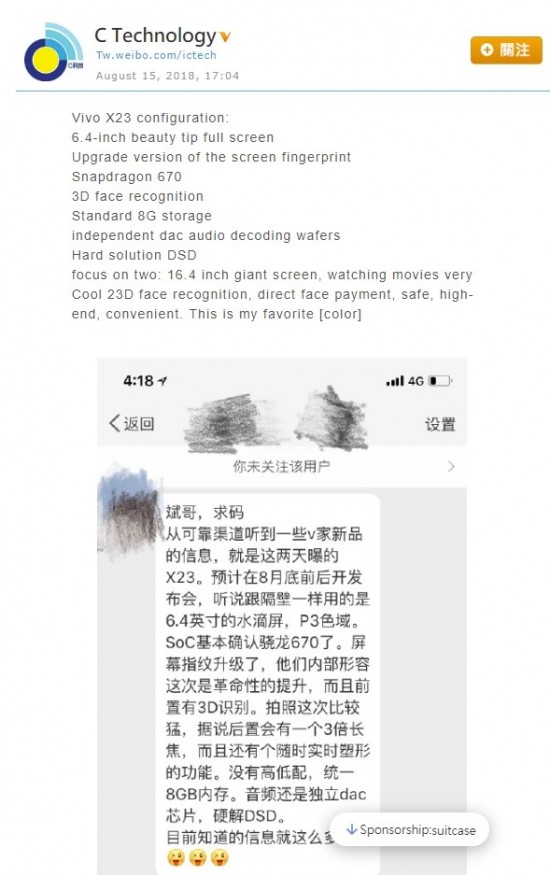 Luckily, there's a new report going around detailing some of the key specs. The handset will feature a Snapdragon 670 chipset paired with at least 8GB of RAM and it's built around a 6.4-inch "full-screen" display. We don't know if the full-screen display means really thin bezels or no notch, but we hope it's both.

According to the leak, the X23 will boast advanced 3D face recognition and improved under-display fingerprint reader. This kind of combination of biometric security is found only on the Xiaomi Mi 8 Explorer Edition for now. In addition, the phone will have an "independent" audio DAC for high-quality sound on the go.

Unfortunately, the source doesn't say where this information comes from, so we can't vouch for its credibility. We would have to wait just a little bit more to find out the rest, if vivo's teased August 20 announcement date is correct.

I can remember an idiot Apple engineer said Android phones needs minimum 5 years to put 3D face recognition in their phones. Seems like Apple's innovations are not really innovation LMFAO