After yesterday’s vivo X30 teaser for its 60x hybrid zoom, today the company revealed a close-up shot of the camera setup, showcasing a periscope shooter next to the three main cameras. The post on Weibo says “a flagship for pro shots” and comes with the hashtag #SuperTelephotoPeriscope. 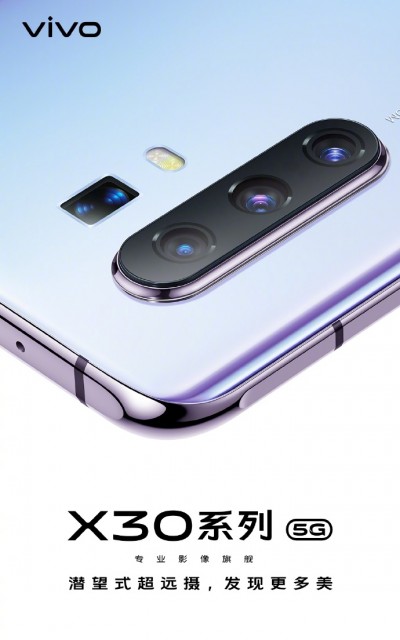 One hour later, the official account of vivo posted a video that reveals the three colors of the phone, as well as giving us yet another glance at the camera setup on the back. The vivo X30 lineup will arrive in Coral color, a mysterious mineral-colored gradient that can be anywhere on the spectrum between white, blue, and purple.

There is also a third, Black color, for those who prefer more understated looks.

Speaking about what the vivo X30 will have on the inside, we had multiple confirmations that the phone will run the Exynos 980 chipset by Samsung that comes with an integrated 5G modem. We also expect an OLED screen on the front with 90Hz refresh rate and a fingerprint scanner underneath.

vivo is yet to release an official launch date, but looking at the rate of teasers, there won’t be much to reveal once the X30 lineup arrives.

And what that supposed to be mean???

Looks like it will be thick and got a big battery.