Vivo’s new X50 family is just around the corner and should be officially unveiled on June 1. After a myriad of leaks and official teasers, over the last few weeks, we honestly thought that we had a good idea of what to expect from the upcoming vanilla X50 and the X50 Pro. In a fresh new plot twist, though, we now have an image detailing a third X50 Pro+ model. This one – a proper Snapdragon 865 flagship. 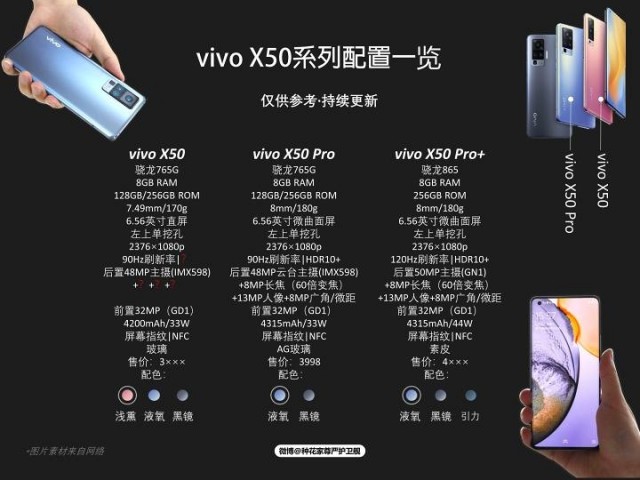 A potentially confusing revelation, this new development does explain certain inconsistencies from the last few days. Mainly, the fact that the X50 Pro was listed alongside a 48MP Sony IMX598 camera module, instead of the new Samsung 50MP ISOCELL GN1 sensor, that vivo already teased in one of its promos. Turns out, the Samsung GN1 will be reserved for the X50 Pro+ model.

Other than a Snapdragon 865 chipset and 50MP main camera upgrades, the source also claims that this newly unearthed X50 Pro+ will come with a 120Hz HDR10+ OLED display. Also – faster charging speeds of 44W. In contrast, that leaves the X50 Pro with a 90Hz panel with HDR10+, further downgraded and lacking the HDR certification in the vanilla X50. Other than swapping the main 50MP GN1 camera for a 48MP Sony IMX598 one, the X50 Pro seems to be packing the exact same complementary sensors on its back. 8MP periscope telephoto, up to 60x zoom, 13MP camera with 2x optical zoom, 13MP ultrawide and an 8MP macro seem to be the currently agreed-on set. But, there are some discrepancies between leaks in this area as well. The source is ambiguous about whether the regular X50 will downgrade this setup any further still, but it does confirm that the maim 48MP snapper will be present.

There are other subtle differences between the three devices that can be easily spotted in the leaked image, as well. Overall, however, the trio is really similar in specs, which likely means they won’t be too far apart in pricing either. The CNY 3998 ($560/€505) figure has been leaked on a previous occasion and is still affiliated with the X50 Pro. As indicated, the Pro+ will definitely be breaking past the CNY 4000 mark. Unfortunately, there is no specific pricing available, as of yet.

And huawei copying s10 design too?

Price seems to be on higher side as in comparison to realme x3....