Vivo is the final stages of development of its new X5Pro smartphone, as indicated by more and more specific details, that have surfaced online. After we showed you a glimpse of the handset's sleek 2.5D glass corners a few days ago, new info sheds light on some of the X5Pro's features. 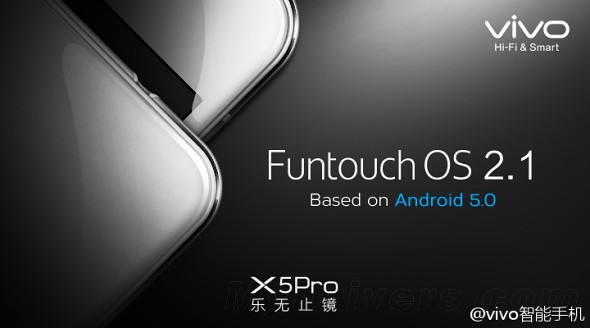 For starters, the camera will come with phase detection autofocus, a feature so far limited to DSLR cameras and a select few smartphones in the high-end segment, namely the Apple iPhone 6 and the Samsung Galaxy S5. Vivo has been working on the tech for a while, apparently, and what was rumored to be intended for the Xshot sequel will make it's way to the X5Pro.

It's not all about imaging though, and one of the slogans in the X5Pro promo images translates into endless music. Together with the "Hi-Fi and smart" motto this leads us to believe the smartphone will feature some serious audio circuitry, targeting audiophiles on the go.

The smartphone will boot Android 5.0, hardly a surprise at this time anymore, even less for a premium offering. In typical Vivo fashion, the OS will be skinned with the company's proprietary Funtouch OS in its 2.1 iteration.

So far, that's all that has been revealed on the Vivo X5Pro. The smartphone is to be expected sometime in May so we'll know the whole story sooner rather than later.

The phase auto detection will be amazing.

Will be very good