Retail stores in China are preparing for the launch of the vivo X60 and are putting up illuminated signs to draw in the crowds. They describe the phone as a “professional imaging flagship”, though there is no actual phone for people to see yet.

This is because vivo has not officially unveiled the X60 series. Like previous generations, we’re likely to see several models in the X60 family, including the vivo X60s 5G, which will be powered by a Snapdragon 765G and will support 33 W fast charging. 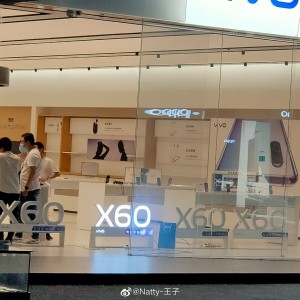 The talk around Weibo is that vivo will launch the X60 in November or December, so it’s surprising to see promo materials go up so soon. Other gossip says that sibling company Oppo will be revealing the Reno5 series around the same the as the X60.

Early reports stated that the Reno5 will be unveiled in May, but as many other things this year those plans were pushed back. The Reno3 series launched also launched in December followed by the Reno4 this June (Oppo wants to launch a couple of Reno generations in a year).

"professional imaging flagship" "hole in the display" Pick one. If they use any 2Mp or 5Mp sensor I'll laugh so hard !

the X60 is available from geek dot com