vivo X7 set to be unveiled on June 30; X7 Plus also coming

Chinese smartphone manufacturer vivo has confirmed that the X7 as well as a Plus variant of the device will be unveiled towards the end of this month - June 30 to be precise. The confirmation came in the form an official teaser. 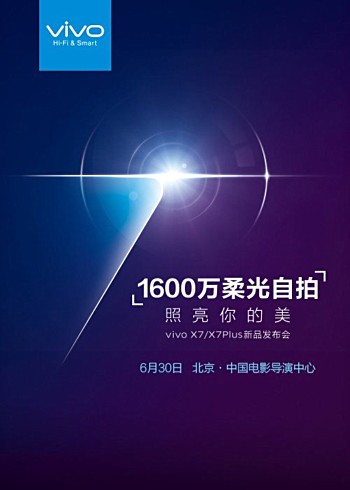 The company has already confirmed some of the key specs of the X7, including Snapdragon 652 chipset, 4GB/64GB memory configuration, 16MP selfie shooter, and a front-facing fingerprint sensor. Other specifications - such as 5.2-inch FullHD display and 3,000 mAh battery - are still in rumors.

There haven't been much rumors/leaks about the Plus variant so far, so it's currently not known how exactly it differs from the standard model, although we do expect it to have a comparatively large display.

All these Chinese brands think they should price their phones the same as Samsung or LG. Vivo and Oppo have to come back down to reality. The X7 is gonna cost INR 30K that more than how much the S6 is selling for right now. The X7 should sell for h...

Wow !! vivo is a R&D based company and I am expecting another master piece. I am using vivo V3Max, which too is superb gadget.... waiting eagerly for X7 series...