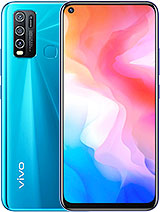 Regarding the Vivo Y30 smartphone, I want to say that it is not worth the money, the helio p35 processor, which costs 3000 hryvnia in phones, is not a competitive level. We need a hit phone that will announce to Ukraine about the Vivo brand, which was at one time V17, Y93 Lite, Y11, V15 pro are the best phones with good optimization, Y30 has nothing to show this is a failed smartphone with poor optimization, it is very slow and with a weak camera is expensive, competitors such as Xiaomi, Oppo, Huawei offer the best phones in terms of price-quality ratio, so give this opportunity from Vivo. The market of Ukraine and the market of China or India are different, in Ukraine they look at good characteristics for not much money and mainly on Snapdragon processors so that the memory is 4/64 or 4/128 minimum, NFC, good battery and most importantly optimization.

So many problems in phones using this mediatek P35/G35 chip. Have a realme with this and the phones performance is laggy.

Hater of govi, 05 Dec 2020It is better than xiomi...xiomi is worst..f k xiomiVivo troll detected

Amal, 09 Dec 2020This phone is very bad this not a GAMEING phone Always playing pubg very lag and phone is v... moreThis phone not for gaming,acc this phone for duty and body trainer,so for gamer s out there don't buy this phone, it's just for athletes because it's has a system called JOVI for our healthy body that's my opinion about this phone because I'm use this phone and as students I use for study and body trainer,tq

Govi, 05 Dec 2020No "Gorilla Glass" ? That is disappointing. It is almost, they want the consu... moreIt is better than xiomi...xiomi is worst..f k xiomi

No "Gorilla Glass" ?
That is disappointing.

It is almost, they want the consumer to shatter the screen.

VexacoreVX, 29 Nov 2020Here's my review. Note that I have been using the this phone for 5 months and this was my... more"who use their phone casually" "Instafamous" uses vivo y30 ROFL
use iPhone or pixel if you need an "Instafamous" phone.
Instafamous 🤣🤣🤣

Here's my review. Note that I have been using the this phone for 5 months and this was my expirience. This phone is good...for those who uses their phone casually. I...am sort of Instafamous so notification keeps getting in and it have a big contribution to why the games kept crashing.

OS Wise:
- The OS is very beautiful but I can see some delay in the OS. Like if you use the swipe up gesture, it took some time and it ain't as slick as what I had expected (Funtouch OS 10)

Camera:
-So so camera. With enough lighting you can take good pics...but I can see the quality doesn't meet my standards. Quite dissapointed as I liked to take pictures.

Gaming wise:
Pubg:
-Can be played in smooth graphics medium FPS. It does have gyroscope BUT it is delayed so...cannot play competitively with Gyro on. I think it has around 20-30 fps and the map loading after landing is slow and sometimes you may be bugged (Landing and suddenly crashing in the ocean (bugged))

Mobile Legends:
-Can be played in Mid to high graphics BUT heat problem. I have experienced crashing issues while loading in the game before the match starts after draft pick. (90% of the time. Yes, you read that correctly. 90% of the time.)

CODM:
-Can be played and to my surprise I have never faced that much FPS drop...but again with the heat problem. You can play the game Competitively...but don't play it too long as it does have heat problem. (Graphics can be at low and high FPS)

Honkai Impact 3rd:
-Can be played but it does have a massive frame drop when there are too many obstacles such as mobs and animation. You cannot play the game competitively as the FPS drop is too much. Once you entered the lobby you have to wait for a good 18-20 seconds before you can be able play. You can be able to see that the Gyroscope function is delayed.

In conclusion, You can use the phone for casual gaming...but some games you can play competitively. Mobile legends and Pubg are so so and for the price...it is too expensive and I could have bought a better phone.

Honestly, I don't like vivo y30. Comparing to other phones of same price or even less, it has no such features which I can appreciate about(like camera, resolution,processor,...). I regret buying.

Anonymous, 06 Nov 2020Only thing Redmi Note 7 is really better at than this point is: 1. FHD display. 2. Google C... more" It takes more time charge than phones with 10watt charging phones. Realme 3 charges in same amount as it, despite having bigger battery."
gonna need a source for that buds, since there's literally a review on gsmarena (and several other site) that say the opposite

"It has lowest performance out of ALL Snapdragon 660 phones. In fact, it's even lower than some Snapdragon 636 phones such as Asus Zenfone Max Pro M1."
again, gonna need source for that

"One of the lowest battery timing of all 4000mAh battery phones."
probably true, it have less video playback time than realme x which have 3765 mAh battery (slightly less than 16h vs slightly more than 16h). that said, 4000 mAh battery isn't common for rn7 price range when it launched

"It has perhaps the most complaints out of all Xiaomi phones. Read its reviews."
have you read it yourself? most of the reviewer (including gsma) said it's one of the best choice for it's price (on early - mid 2019 ofc).


and lastly the spec is definitely true. tweaking the phone to make it sub-optimal is one thing, but lying on paper is begging for law cases

Just forget about buying this phone. I bought this 4/128 GB phone two months ago and it was my first time trying this brand as my fris say Vivo is not that bad at Budget and mid range phone. i was comepletely wrong. its appearance is nice though. but screen freeze often while playing some games like mobile legend & PUGB. i think it might be the reason of 5000 mAh battery. am i right? the phone is so overheated whenever i played games. and started screen freezing and lagging. i just wanna throw this trash away. Oppo A52 is way better than this trash. JUST DONT BUY THIS PHONE AND FORGET VIVO BRAND.

Anonymous, 04 Nov 2020lol, how much is vivo paying you? redmi note 7 have lower price on release and still better t... moreFYI: I also hate Vivo and I've no idea why it's popular.

Anonymous, 04 Nov 2020lol, how much is vivo paying you? redmi note 7 have lower price on release and still better t... moreOnly thing Redmi Note 7 is really better at than this point is:
1. FHD display.
2. Google Camera support by Gcam developers (if you use it).
3. IR Blaster.

Other than that, RN7 specs are fake.
- It takes more time charge than phones with 10watt charging phones. Realme 3 charges in same amount as it, despite having bigger battery.
- It has lowest performance out of ALL Snapdragon 660 phones. In fact, it's even lower than some Snapdragon 636 phones such as Asus Zenfone Max Pro M1.
- One of the lowest battery timing of all 4000mAh battery phones.
- It has perhaps the most complaints out of all Xiaomi phones. Read its reviews.

Duh, 28 Sep 2020Lol you are funny hooman. Don't expect too much for this phone. It's not even a mid ... morelol, how much is vivo paying you?
redmi note 7 have lower price on release and still better than this one. let that sink, a NEWER and PRICIER phone can't even beat their one year old competitors. what's that? you dont want ads? then how about Samsung M21? you'd get FHD OLED and performance on par with redmi note 7, you also can be that cool kid since it's not from cheap nameless brand like vivo
i also pity you if you really think pubg is still a big game in 2020. you're right though, this phone is TRASH for that kind of game and also TRASH in general

farmalmie, 30 Oct 2020So basically, people sayin' no to this phone - am I right?for me this phone is so good, because its faster than my old android phone that 2/16 GB, plus it has a gaming mode that won't ever drop alot the FPS

Total of 127 user reviews and opinions for vivo Y30.
ADVERTISEMENTS