The recently outed X5 Max (with its insane 4.75 mm thickness) apparently isn't the only smartphone that Vivo is currently hard at work developing. A new leak from China details another device coming soon, and this is an even bigger phablet.

Given its screen size and the specs at work, we assume this will be the official sequel to the Xplay 3S which was announced last December. 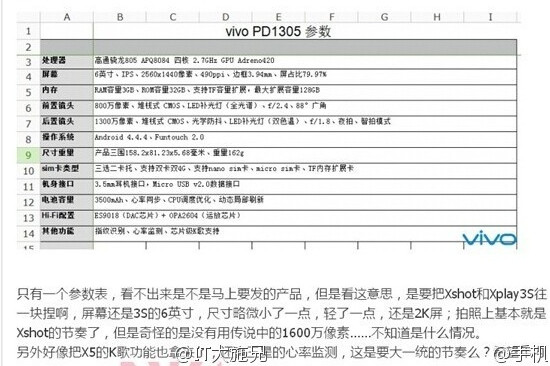 The new handset is currently known just as the Vivo PD1305. It is said to sport a 6-inch QHD IPS touchscreen, a screen-to-body ratio of 79.95%, a 13 MP rear camera with optical image stabilization and dual-tone LED flash, as well as an 8 MP wide-angle lens front camera.

At the helm will be a Qualcomm Snapdragon 805 chipset, coming with a 2.7 GHz quad-core CPU and Adreno 420 GPU, aided by 3GB of RAM. 32GB of storage will be built-in, but will be further expandable via microSD. 4G support comes standard, as does a 3,500 mAh battery. The new Vivo will run Android 4.4.4 KitKat with the Chinese company's own Funtouch 2.0 overlay on top.

While it's not going to be as thin as the aforementioned X5 Max, this new phablet will also be very slim compared to its competition - just 5.68 mm. The other dimensions are 158.2 x 81.23, and they too showcase a very compact phone given the display size. It will weigh 162g.

Compared to its predecessor, it comes with a newer SoC, a higher-res front camera, a beefier battery, and more compact design. It's going to be 10g lighter too.

WOW! except maybe for just a 13 instead of the 16 MP front camera that is in the Note 4, if all of the listed specs here are all correct, this Vivo smartphone will definitely post probably the toughest threat to Samsung, with its Galaxy S, and Note s...