Vodafone have announced two of the cheapest phones ever and we do mean they make a cup of coffee look expensive. Meet the Vodafone 150 and the Vodafone 250, which one-up even Nokia's entry-level phones.

The Vodafone 150 harks back to the early days of mobile phones. It can store 100 contacts, has 500mAh battery that lasts 400 hours of standby and 5 hours of talk time. The phone works in 900/1800 MHz GSM networks. It charges through a miniUSB port. Beside that, the Vodafone 150 also supports mobile payment services and has a flashlight on the back.

The Vodafone 250 is more, um, advanced. It has a slightly bigger color screen - a 1.45" CSTN display of 128 x 128 pixel resolution - and is equipped with an FM radio with stereo headset support. The rest of the specs are the same - 500mAh battery, 400 hours standby, 5 hours talk time, miniUSB port, 100 contacts and a flashlight. 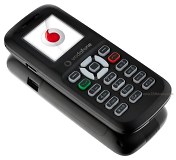 The functionality of this device don't cease to amaze me. It's probably the phone with best price/value ratio on the market. I have a latest generation smartphone but still use this one for phonecalls and sms.

This looks as easy to use as the Jitterbug. It would be good to market toward seniors. If it works in the US on T-Mobile, I'll get one for my parents!

Maybe they take out the screens and components of all the recycled phones, if not that would be better. What happened to the disposable mobile phone idea? I think it has a market with kids, maybe you will get one of these free with a certain fast foo...