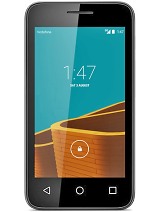 Pro: It is a fully working smartphone that can run any android app
Pro: It only cost £30.
Con: It is the slowest smartphone I have ever used.

this is the worst phone in the history of mankind! it junps about, the touchscreen doesn't work! makes calls & takes photos in your pocket! faulty from day one & not fit for purpose

How do I delete call history?

MS GORGIOUS, 09 Sep 2016When i try to install some app it keeps prompting "your device isn't compatible with this vers... moreIt's Android version 4.4.2 (KitKat) which is very old

does anyone know what to do to open a mms on this phone?

I got this phone 2 years ago and it was completely crap .It was lagging from the first day, it doesn't have a flash so I switched to huawei p8 lite which is a much much much better option

Sin, 17 Jan 2017Crap, avoid if possible. I was originally looking for a specific cheap smart phone which m... moreI do have a Vodafone smart first 6 I know the camera is not the best but would like to know how to transfer the photos from the phone to my computer

Don't buy it coz it's crap, you would be wasting ur money. It gets worse as the months go. It's quite a problem.:-@

Sin, 17 Jan 2017Crap, avoid if possible. I was originally looking for a specific cheap smart phone which m... moreWhat did you expect from a phone that only cost £30? You make no sense.

I was originally looking for a specific cheap smart phone which my friend had purchased at Asda. Hers was cheap and cheerful at £40 , and worked remarkably well. Unfortunately, that particular phone had sold out, so I decided to spend that £40 on this instead.

Big mistake. Was glitchy from the get go, including on basic call/text functions. Most incoming calls cause the screen to freeze, by the time it unfreezes, I've missed the call.

Camera is crap.
Keyboard is crap (and has these weird, inefficient glitches).
Memory is crap.
Touch screen can be crap.
Speed is crap.
And battery is most definitely crap.

If I knew all of this, I would not have wasted my money..which could have gone towards a better phone, or on the cheap and cheerful alternative I originally set out to purchase.

Add that onto the fact that the Voda pay and ho network is also a pile of crap, and here we have the most recent and persistent bane of my life.

Never buying Voda hardware again, and never opting into the network again either.

Why are they even in business? Leave it to the pros, yo.

Anonymous, 30 Aug 2015How to delete person from what's app That has nothing to do with the phone itself

Helphhh, 13 Oct 2016Can't find how to edit or delete contacts!!?!?? Very annoying. Is it possible that it is not p... morewhen you are in the menu of contacts or in one particular you press that "button" at the bottom right (the square ) and it gives you the options ( deleting, sharing, editing and printing)

Won't turn on or charge

I bought an 8 gig memory card to boost the phone storage capacity. The card currently has 5 gig available but whenever I want to download apps the device storage is full. I made the SD card the default write disc. How do I solve this problem.