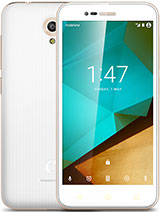 Phone Freezes and it reboots on its own several times. I cant do anything on its very sad.
Sometimes freezes while you are receiving a call and cant answer the call.

the phone is shit. it reboots on its own several times.

I have had this phone (Vodacom smartphone prime 7) for 13 months before experiencing a problem. Phone reboots about 6 times per day by itself. According to a few websites, this is a common problem on a number of phones from different companies. I cannot believe that there is no cure for this. Surely one of these companies must have investigated this problem and found a solution for this? If it is a battery problem, why did they not replace the batteries with another working version? I was unable to find a solution to the problem and found the Vodacom website not a very friendly site to visit with no workable solution to be found.

The device itself was okay. The camera wasn't to bad, was snappy using the Internet, browsing, YouTube, Facebook. It handles games like Temple run 2 fine. You won't get much from the GPU. But, it took a small fall off the coffee table to ruin the screen. The LCD was fine and the phone was usable. Soon though it froze, I rebooted it and never came on again. I sent it in, repairing it would've cost prety much the same as the phone. So the built quality was poor. Hauwei should be making Vodafone again on the side. Not Alcatel. Specs wise it was great for the price. But the device would need a super tough cover. It doesn't take much to damage it. Rather pay a little more for the hauwei Y5 2017. Or the better built but weaker Nokia 3 if you are on a budget. Super cheap entry level phones aren't worth it. Around the Samsung J3 prime,hauwei Y5 2017,Nokia 3 price range is as low as you can go.

I have been using this device for nearly a year and the screen shows 2 burned areas, the camera is very faulty (i believe is the software) giving me black squares and missing colors on multiple pixel (front camera a total joke unless you are in a very good lighting condition). it has a way of overheating by doing simple task like browsing through web (sometimes even when watching locally stored media). Even though its an android the user interface is complicated and unbearable. My device came with 2 apps for calls and 2 for messages, and i needed to disable 2 otherwise i wold get every notification in double. Storage is so low that i am afraid i might run out of data even from updates. Its a pretty bad device and all i loaded to it is: whatsapp, viber and samsung health

Anonymous, 01 Nov 2017this phone beats most phones and if u dont believe me, get your bitch ass here and i will show... moreRubbish this device runs slow 8gb of storage what a joke! even for basic use it's no good

Been using this phone for 3 months, got some few tweaks enabled am a baby user, but still functions great, the battery omg...two days is rare but not when using this device

Khathu, 01 Jan 2017I bought this phone is just awesome and nice pics and the memory card can be used as internal ... morethis phone beats most phones and if u dont believe me, get your bitch ass here and i will show you it is worth the money cause it is

Anonymous, 20 Jul 2017This phone ils rubbish. Vodafone should remove it from their stores. this phone is dope if you just figure out the hidden stuff on it. it is the reason why vodacom exists. its better than the j1. go search online and you will see. pieces of shit

What's wrong with it?

zooo, 18 May 2017hey guys so i recently lost my samsung phone and i think i should go for this phone. i like... moreDon't even. After less than 5 months having bought it, I regret it, hopefully you didn't buy it

This phone ils rubbish.
Vodafone should remove it from their stores.

It has only 4 GB internal memory !

Hi guys. Does this phone have MirrorLink?

hey guys
so i recently lost my samsung phone and i think i should go for this phone. i like it for the fact that it looks like an i phone 7 .. but looks can be deceiving so should i buy the phone or not ?

I've just bought this phone after my Samung S4 decided to cook itself to death.
As there was no music player i loaded the app VLC. It scanned for my music on the SD card which contained my music files. No problem in playing music or videos. Also the app contains a equaliser which improves sound quality when a suitable type is selected.

Biggest load of rubbbish I have ever held in my hands. I demanded my money back after 2 weeks. It is so slow that it sometimes cant even answer calls! It cant save numbers for whatsapp, it hangs all the time, always runs out of space. It is simply unusable. Dont waste your time and money. If I could give it negative stars I would.

barely had this phone for a year and its freezing doesn't let me go on any of the apps
should of expected this from a cheap phone. I liked it at first but now its just, basically unusable. Thought it was the best £75 I've ever spent but I was wrong it was the worst