Vodafone suggests its iPhone 4S users do not update to iOS 6.1

Apple had recently released the latest update for its iOS platform, improving LTE support and fixing a few bugs. Unfortunately, iOS 6.1 seems to be having issues with connecting to the internet, sending and receiving texts and also occasionally with making and receiving calls on the iPhone 4S. 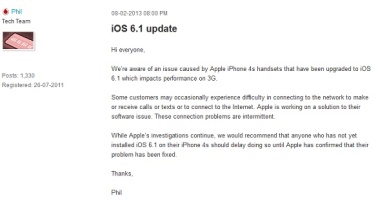 That's why Vodafone has advised its Apple iPhone 4S customers to refrain from updating to the latest version, until Apple fixes the 3G performance issues. Similarly, one of our readers from India claims to have got a confirmation from Apple itself on the bug issues.

The good news is you won't be missing much if you skip the update for now, except for the new Siri functionality.

I have an iPhone 4. You can not watch BBC iplayer etc on it now. Vodafone unable to update software and vodafone holding me to a £34 month contract until jan 2014. I will Never never have a contract with vodafone again

please double confirm that the bug is with iPhone 4S only.

What I usually do is wait for sometime, dont be in a hury to upgrade, all these complaints never happen.Plus there is always an option to revert back/downgrade.