We are in Berlin, eagerly waiting for IFA 2012 to kick off

The time for IFA 2012 is quickly approaching and we are on site, ready to bring you coverage of the news as it happens. And by the looks of it, there will be lots to report in the next few days as manufacturers unveil their lineup for the holiday season . 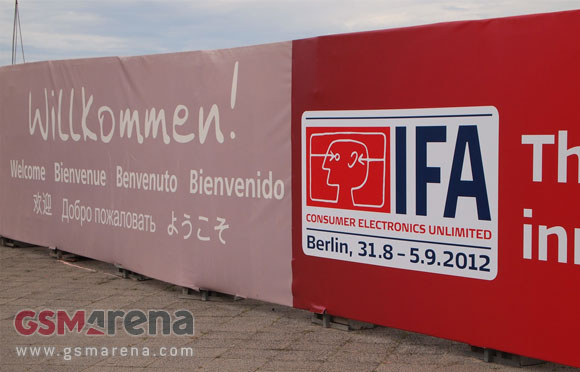 As with most big expos, the headlines are written before the showrooms open for the general consumers, when most manufacturers hold press-only events. IFA 2012 is no exception, with the first announcements expected to come tomorrow. Now let's see what we expect to see in for in the next few days.

Kicking things off is the Panasonic press conference, but the centerpieces of tomorrow are going to be Sony's and Samsung's press conferences kicking off at 04:00pm and 07:00pm CEST respectively. We'll be covering them live and bringing you life photos along with our first hand impressions of every single device the smartphones giants announce.

Sony is expected to announce quite a lot of devices including the Xperia SL, which appeared prematurely, the Xperia Hayabusa (GX), the Xperia T (Xperia S successor), Xperia J, as well as a new Xperia tablet. We are also expecting Sony to unveil new cameras, TV sets and less probably its newly leaked Windows 8 RT-running 11-inch slate.

Right after Sony wraps things up, Samsung's press conference will start. One of the most anticipated events of the whole IFA 2012 show will lets us see the N7100 Galaxy Note II, which has been doing the rounds in rumorland for at least a few months now. Besides the phoneblet, Sammy is also expected to unveil the dedicated Galaxy S Camera, which we were the first to tell you about.

On August 30, all the eyes will be on LG's press event, where the company's expected to officially showcase the quad-core Krait monster Optimus G as well as its newly unveiled high-resolution displays. Naturally, the company will also show some of its new home appliances, but that's not what we are here for.

There are many other manufacturers that will make an appearance at this year's IFA in Berlin. You can check the full schedule of the event here. Stick around!

i can't wait for the samsung galaxy player 5.8

I am looking forward to the Samsung G Note 2. This monster could the star of the show.

I am waiting for what Sony, Samsung and LG could offer us... Sony's Hayabusa and Mint can definitely compete with quad core phones nowadays just like the HTC One S that uses S4 chipset from Qualcomm and it has shown atleast 5000+ pts on benchmark tes...