We get more pics of Vodafone 360 H2, Vodafone says it's canceled

We just got some more photos of the LiMo OS powered Vodafone 360 H2 phone along with some confirmation of a few of the rumored specs. In the same time a Vodafone rep contacted us saying that the Vodafone H2 has been canceled since July 2010.

The successor to the Vodafone 360 H1 has been around in the rumor mill for a while now, but following the new leaked images from Sunday, Vodafone came up and confirmed that there will be no new Vodafone 360 handsets and that development of the H2 has been ceased since last summer.

We acknowledge these new bits of info and we hope Samsung will put the hardware to some nice use in another handset (Bada OS, maybe). We can't help but publish the new shots of this dead-end prototype as a wave goodbye.

So here it is compared to the iPhone 4 and a BlackBerry. 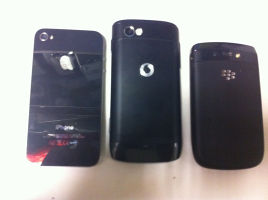 We guess this is the end of LiMo handsets altogether although that mobile OS was a hacker's dream. The small and dedicated community has already ported to it Android 2.2 Froyo, MeeGo and even Debian (a Linux distribution, many other distros are based on it).

They should cancel it for the fact that it uses a 1000mah battery. How clueless are these companies??