Three quarters of voters in last week’s poll prefer an in-display fingerprint reader over a face recognition system. There were discussions of security and practicality, but hardware limitations also played a role – face scanning equals a large notch or a chunky top bezel.

Of course, many people were saying “why not both?”, but makers tend to go with one or the other – e.g. when Apple introduced Face ID, it dropped Touch ID, Google followed a very similar path.

Huawei did offer both with the Mate 20 Pro, but that didn’t last. The Huawei P30 Pro dropped the 3D face scanner on the front to make the notch smaller. The Mate RS Porsche Design was an oddity - it had one of the first in-display FP readers, but also a rear-mounted one. Huawei never followed up on that, though. 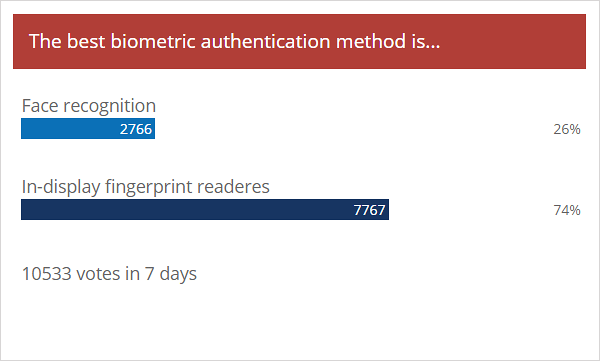 By the way, there were many proponents of the rear (or side) mounted fingerprint reader, however makers see it as a “lite” feature as opposed to a premium one – just look at the P30 and P30 lite, Galaxy S10 and S10e, etc.

Not necessarily a bad thing, unless you want a flagship with a FP reader on the back/side. Then you’re looking at only a few options – a Sony Xperia 1 or Xperia 5, plus the Honor 20 and Pro.

So, unless we’re talking about Apple (which can be quite stubborn), it looks like in-display fingerprint readers are the way to go forward.

Why I prefer UDFS is because I don't have to pick up the phone everytime I want to unlock it. I can simply touch the display and...it's unlocked

Might be, but also alot of apple fans dislike the face id and went back to password - they may also not be on gsma but at least some people I know personally who dont want their face scanned and were awesomley happy with a button on their phone...jus...

Not really fanbois, some just do not want to be forced to always use the Apple App store or like to customize the look of the phone oh and lets not forget a app-drawer!