Last weeks poll shows that buyers are faced with a dilemma  people love the new Huawei Mate 30 duo, but the no-Google situation means that many will hold off on buying one.

Many in the comments are optimistic that manually installing Google Play Services is easy enough (after all, many do that to phones they imported from China). Some even seem happy enough to use Huaweis AppGallery instead.

Still, instead of an overwhelmingly positive result, the phones got more of a lukewarm reception. Maybe things got a little warmer after the Mate 30 Pro climbed to the top of the DxOMark charts.

The Huawei Mate 30 Pro is the clear favorite here. A third of voters are happy to buy one as-is and the number can grow to 50% if Huawei is willing to drop the price a bit. Theres also a significant portion of people who arent willing to flash the Google package themselves. 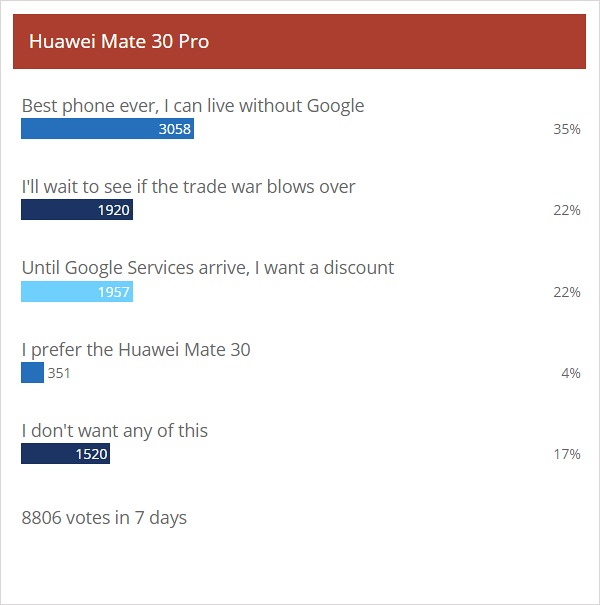 The Huawei Mate 30 was also well-received, but not nearly as much as the Pro model. Still, the positive vote was again close to one third. That's much better than the Mate 20 did in the polls a year ago.

Huawei's non-Pro phones are often in the shadow of their more premium siblings, that was also the case with the P30 vs. P30 Pro. 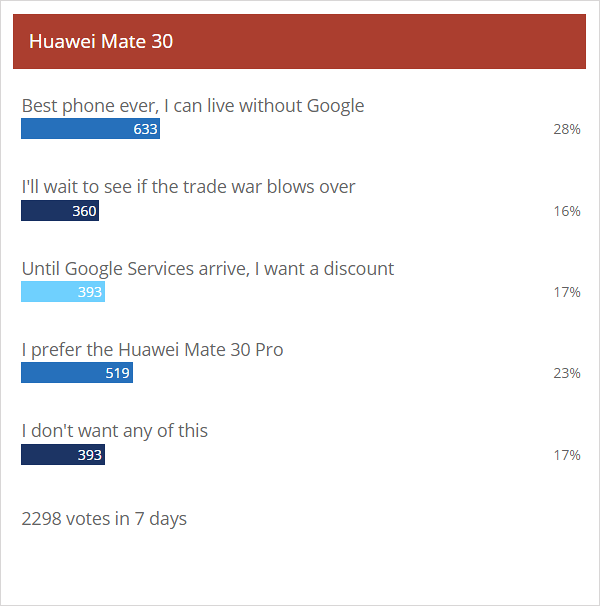 Both models will launch globally next month (they are already available in China). CEO Richard Yu believes that Huawei can sell 20 million Mate 30 units even without Google, but its clear that this number will be even higher if the trade war comes to an end.

How can you reset something which you cannot access? Without root, the only thing you can reset with a huawho is your wallet..

Lol everything can be reset.

Installing apk on Android to using Linux is an absurd comparison. If these same masses can connect a OTG cable and access a pendrive or Hdd, They can install a simple apk. There are one click rooting solutions as well.