Weekly poll results: phones with 90Hz and 120Hz screens will be in high demand this year

One in three people think that a 60Hz refresh rate is good enough for phones and the reason is simple  battery life. However, most of the people who voted in last weeks poll are looking to upgrade to a phone with a high refresh rate screen.

Most agree that 90Hz should be the minimum for mid-rangers and flagships. However, nearly as many people voted for the 120Hz option. Its more taxing, sure, but its not unreasonable. The Redmi K30 scored an impressive 101 hour Endurance rating in 120Hz mode, down from 114h in 60Hz mode. And thats with a 4,500mAh battery, which isnt exactly enormous.

Also, 120Hz phones are not even expensive  not since the Poco X2 was unveiled at least. Its essentially a rebranded K30, but given its 200 price, were not going to complain.

The major phone announcements of the first half of 2020 will be over in a couple of weeks. Judging by the rumors so far, there will be many 90Hz and 120Hz phones to choose from  right on time as demand for high refresh rate screens has reached a tipping point and it is now an important consideration for buyers. 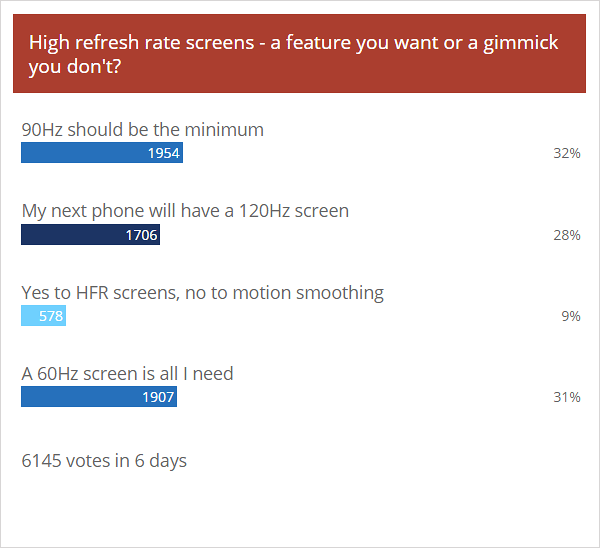 like A7 2018 first i bought it i can do spilt screen then after the update i wont work and camera getting bad :(

It isn't that I'm against 90hz120hz/hfr screen, but more on what they can do with the money if they stayed with 60hz screen? If I have unlimited budget, of course I want the highest refresh rate screen (144hz max tho... higher than that would be stup...

No Android OS running on flagship chipset lags in 2020. Even budget devices are equipped with 4-6gb RAM don't lag. You keep spitting out your hatred against Sa*sung in every comment section. How about you be polite next.