Well, that’s a surprise – no, not that people like the Redmi K20 duo, we expected that much, but that the vanilla model got a higher ratio of approval than the Pro. To be fair, the two phones are quite similar, except the non-Pro model offers an attractive discount on price.

The Redmi K20 does settle for a Snapdragon 730 chipset, but it isn’t exactly slow. It’s been years since a new generation flagship chipset offered a massive improvement and some of the commenters over at last week’s poll agree that it’s not necessary to get the 800-series chip. If you want power the Redmi K20 Pro has it all – the flagship Snapdragon 855 chipset and more powerful 27W fast charging, plus it can record 4K at 60fps. Whether or not these are worth the price premium is up to you. Some did question if having two models was necessary, but in China at least, the Pro costs 25% more than the vanilla model (the rest of the world should expect a similar gap in the prices).

Well, the K20 Pro has almost everything. It doesn’t have waterproofing or wireless charging, but then again neither do the OnePlus 7 and 7 Pro. And it’s exactly these members of a former “flagship killer” family that are among the chief competitors to the K20s. 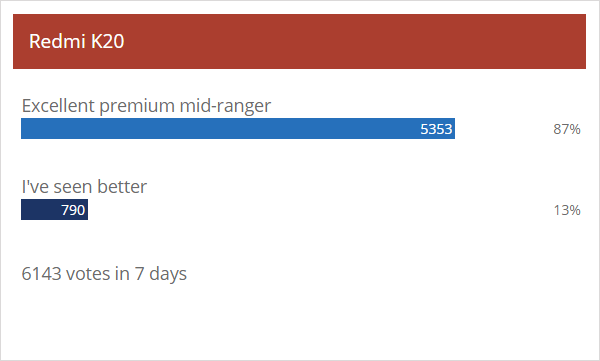 Asus built a capable, aggressively-priced flagship with the Zenfone 6, but it doesn’t have the same connection to fans that OnePlus and Xiaomi have. Just look at their Twitter accounts – one has a hype train of tweets, the other is pretty quiet. Fan relations shouldn't be overlooked when trying to sell millions of units.

Realme is one to lookout for, with the Realme X shows the company aims higher and higher, and it might soon deliver a direct rival to the K20 and K20 Pro.

These are just some examples, many of the commenters had their own thoughts about alternatives to the Redmi K20 duo. They should keep in mind that not all of those will be available globally.

It seems pretty clear that Xiaomi found a niche in the market and is about to sell a lot of phones. The battle in China will be pretty fierce. As for the rest of the world, we’re still waiting on pricing for the Redmi K20 / Xiaomi Mi 9T / Pocophone F2 (as the phones will be known regionally).

Limited bands maybe but those specs will kill the competition for sure. For that price phone with that specs apart from K20 pro doesnt exist.

K20 Pro isn't killing anything with those limited LTE bands.