When we asked you two years ago, every other person said they keep their phone for two years before buying a new one. Last week we asked the same thing, but got a very different answer. The two-year upgrade cycle is still quite popular, 1 in 3 practice it, but it ended up in second place by the slimmest margin.

Most people now hope to keep their phone for three years. It seems that once you find a phone you are happy with, there’s no strong urge to pay more money for the latest and greatest. Part of that is due to rising prices, smartphone trends play a part in it as well (many are still bitter about the removal of the 3.5 mm headphone jack, for example). 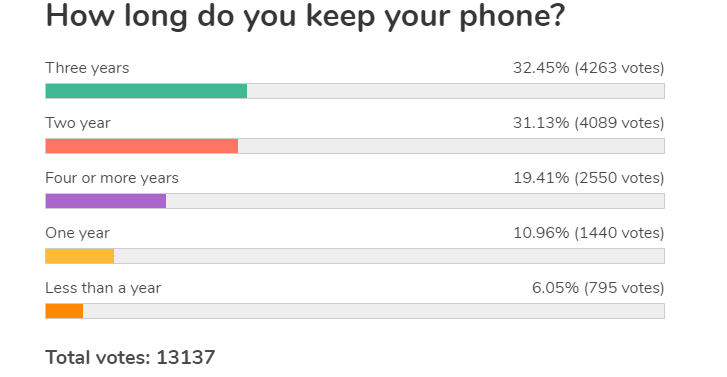 Three years is a fine period indeed, it’s how long most Android phones are supported for – two years of OS updates and another year of security patches is the usual agreement. Also, while using an older Android version is fine, phone batteries start showing their age after 2-3 years.

Far fewer people buy a new phone every year – that option was chosen by 20% of voters in the old poll, and 11% in the new one. The number of people who upgrade several times a year has taken a dip, but that group is not very price-sensitive, so the drop is much smaller.

On the other extreme are people who think even three years is too short – 1 in 5 say they will keep their phone for at least four years. For them, the developments in mobile cameras, batteries and charging tech are alluring, but not enough to ditch the old phone. 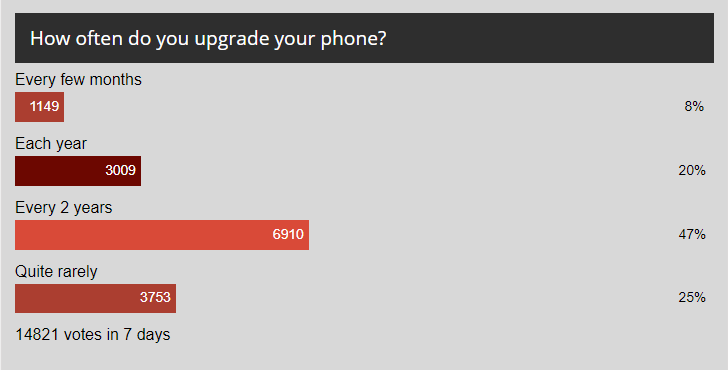 Waiting a bit longer will allow tech to mature (e.g. 5G modems) and to become available in mid-range models (e.g. periscope cams). Of course, by that time some other hot new technology will have emerged to keep the upgrade treadmill going.

I didn't see any Wi-Fi issues picked up on at launch, here or elsewhere, other than "Samsung has some optimising to do.". (See under Communication & GPS): https://www.notebookcheck.net/Samsung-Galaxy-S10-Smartphone-Review.41062...

I forgot to also mention the XDA community, but you shouldn't have to be searching for fixes, hopefully these issues will be fixed with your next monthly OTA update. https://forum.xda-developers.com/s10-plus I would still contact Samsung ...