Xiaomi’s latest flagship duo was welcomed with opened arms by fans in last week’s poll. Interestingly enough, though, the more capable (but more expensive) Pro model placed second – it was very close, but still the base model proved more popular.

The Xiaomi Mi 10 5G beat its Pro sibling by 2 percentage points. And it was well ahead of Mi Note 10, which is a good deal less expensive despite having two extra cameras. Telephoto cameras just weren’t the most important feature for voters.

The Xiaomi Mi 10 Pro 5G does have a 5x zoom cam plus faster wired charging (50W vs. 30W), but its higher base price deterred many voters (the Pro commands a 25% premium). The phone is still a hit, but Xiaomi is getting close to the price ceiling that its fans will tolerate. 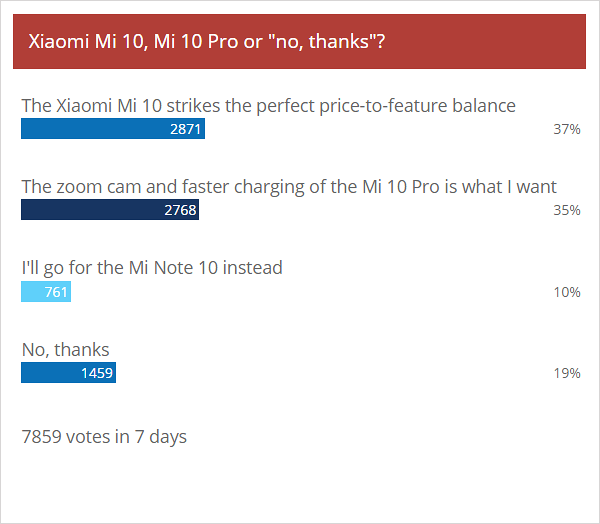 The Xiaomi Mi Note 10 got a strongly positive response in its own poll, however, people criticized it for the chipset (S730G). The Snapdragon 865 inside the Mi 10 duo is much more becoming of a flagship, though not everyone is excited about the addition of 5G.

Where did you purchase ?

i just brought with the Mi 10 pro white . it was the beast flagship phone that i'm waited for sure .