Facebook-owned popular messaging service WhatsApp has been found blocking links to rival messaging app Telegram. Although you can send/receive Telegram links, they appear as non-clickable (just plain text) and you cannot copy/forward them (see screenshot below). 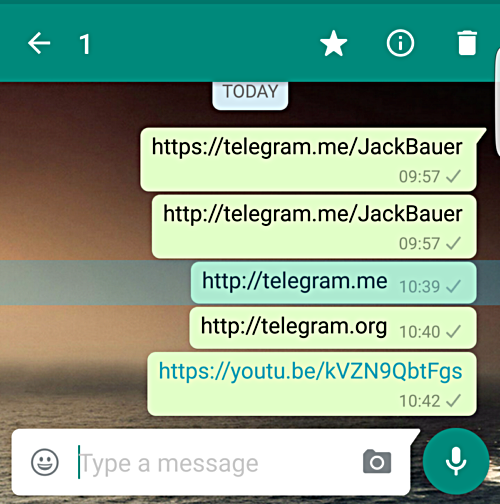 In general, it looks like any link having 'telegram' as a sub-domain is affected. Only WhatsApp's Android app is currently exhibiting this behavior, which was first spotted by users on Reddit. A new update pushed yesterday is said to be the culprit - it didn't bump the app version, which remains at 2.12.367.

On its part, Telegram has confirmed the situation, but the company doesn't seem much concerned. "Typically after a media backlash, FB steps back and blames their intelligent filtering for the problem," a Telegram spokesperson said. "We expect the same to happen this time as well." Facebook and WhatsApp are yet to comment.

It's worth mentioning that Telegram recently received some bad press over the fact that the company knowingly allowed members of the Islamic State terrorist organization to use the app.

Enabling is a very basic concept. Doing so Willfully is the problem. follow the logic train here. If they didn't know, it would be as if they were using a blackphone etc, but in this case the article clearly states that they DID know and that they AL...

Lol come on man you're smarter than that.