Nearly a month after a white colored variant of the Xiaomi Mi Mix leaked in images, the model has been listed at a Chinese online store. The model isn't available for purchase yet - you can currently only sign up for sales alerts forit. 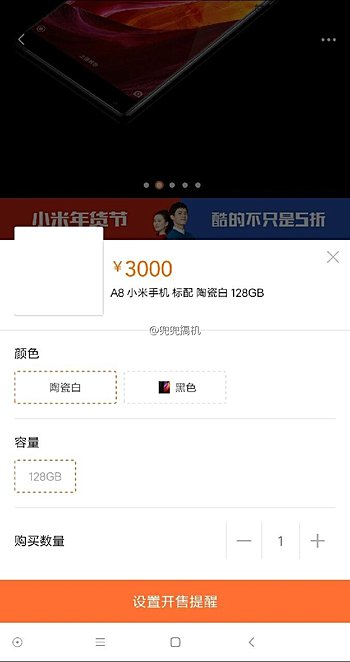 As you might already know, the selling point of the Mi Mix is its nearly border-less display of 6.4-inch and 2040x1080 pixel resolution. Other specs of the device include Snapdragon 821 chipset, 4GB/128GB and 6GB/256GB memory options, 16MP/5MP camera combo, and a large 4,400mAh battery. The phone is currently only available in black color.

While it's yet to be officially confirmed, except color, there shouldn't been any other differences between the white and black variants of the handset.

Looks good!! although now the slim bezel is visible. tiny bezels is the way to go!!!