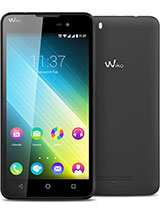 wiko lenny2 is the best phone I have used so far, since 2015 till now ,haven't had any problem and the battery is one in a million, thanks to wiko though not happy that I can't get your product anymore

I was using this phone for about 6 months and during those 6 months the phone started deleting all my apps by itself and I had to reinstall all my apps,the camera is shit and everything is shit if you just bought this phone i recommend you switch,i switched to a samsung galaxy s7 edge and it was a big diference...

The phone is awesome, I dunno how they construct the screen, it so hard. It a year now dah am using it. Thanks wiko.
my phone don't download,
my 8gb memory card is not working on it.
I need help on how to resolve the issues.

oh boy this phone is bad. and I had a few lowbudget phones to use as back-up but boy this one is just bad, not sure what's wrong but always keeps crashing in apps or games

Someone, 05 Jan 2017Batteries run out quickly. If you frequently use the phone for 2 and half hours, the battery c... moreSorry its not 'RAM'. It is 'MAH'.

Batteries run out quickly. If you frequently use the phone for 2 and half hours, the battery can be draining out from 100% to 5%. Wiko, please add battery's RAM in every mobile! I'm tired of charging.

Anonymous, 05 Sep 2016my phone shows thats its charging but it doesnt add up the percentage it remains stagnant..the... moreDid you try using another battery ???

Anonymous, 09 Oct 2016How to solve heating issue.........?Did you tried closing every background app that uses to much RAM

Anonymous, 22 Dec 2016Hello! This phone is awesome ( for me of course) . But if i would have a choose option I would... moreHi there, I wanted to ask how you freed up so much RAM
Thanks

Hello! This phone is awesome ( for me of course) . But if i would have a choose option I would buy another . But for the prize is to good . For me i have almost 1 year that i I have Buyed it and has his birthday on 28 Dec ... Anyway after six months an update was done to this phone ( i did it ). And in installation process it stucked and showing a laber "error". After that my phone bricked. So I tooked a while To understand that i needed to install his firmware. So i I did this in June of this year and then it was working perfectly again. But 1 week later later the flashlight had à problem and the first camera wos not working (hardware issues), . So I installed the firmware again in the phone several times and the camera worked just one or two days and the problem camed back again. So i just let him and in November it fixed and now doesn't have a problem. But this phone needed some extra fuctions. Example: the control keys one time worked and the stucked . So i I installed the software keys in the display . Secondly i have increased Ram space from 768 MB to 2.5 Gigabyte because it was very slow. I have installed the iOS 10 emojis because the Google Lollipop emoji were so uglyyy .. i have tryed to install the Lenny3 firmware to upgrade to 6.1 Android but not worked . Now works perfectly with all those (and others changes) i have done. So for experimenting it's the perfect phone and so cheappp ..I highly recommend this. And the camera it's not perfect but some times it has a "wow" perfect capture. 5 / 5 stars

I have been used this phone for around 7 months.. And i had no problem with it. I love the camera even it is 5mp but my friends asked me "did you capture your photo on instagram using iphone?" Hahaha.. Thank you wiko, much of loves.

Lovely phone and works well, but I have tried to put a memory card in first time 32 then 18 and finally an 8 gb, but non work on it and you are unable to transfer apps, or download new apps a message comes up insufficient memory. Otherwise a brilliant phone. Of course the problems may be me as I am not to tech wise. The other thing is where can I get a charger with an English plug?

my wiko lenny 2 has stopped working, can i swap it for another one?

me, 24 Aug 2016could you please teach me how to remove the dictionary when writing messages? i used a lot of ... moremy phone shows thats its charging but it doesnt add up the percentage it remains stagnant..the original charger doesnt charge it too n the other chargers behave the same what should i do?