Windows 10 will run on phones, share apps with the desktop

Microsoft is unifying Windows 10 for large devices (8+ inch screens) and small devices (phones and small tablets). It has tailored the experience to the size class so you won't get a large desktop on your small phone, but many shared interfaces will make things feel familiar to users as they switch between form factors.

Developers will be able to create apps that work on a desktop, a phone and even Xbox. Joe Belfiore demoed a special version of Office (still under development) running on a phone, but it will work just as well on a desktop.

The tile-based launcher remains unchanged, but the Settings menu and the Action Center share their base design with the desktop Windows, which will improve the learning experience for users.

The People app will work across device and will aggregate your contacts. The app will let you quickly start a call (regular or Skype) or message a contact. The upcoming Outlook update will feature Tinder-like swipe functionality - left for delete, right for flag. Meanwhile, composing emails will be handled by Word. 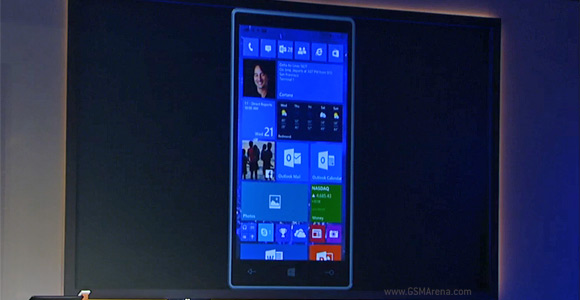 Speaking of, Windows 10 will come with a rich set of Office apps - Word, Excel and PowerPoint. They have the full capabilities of their desktop counterparts, but can reflow docs so they fit better on the small screen.

Messaging is now more unified - the default Messages app can handle all Internet-based messaging like Skype, so all messages accross supported services will be in one place (third-party apps need to support it though).

The on-screen keyboard can be moved around to position it more comfortably on phablets. You can also rely on Cortana to transcribe spoken text. 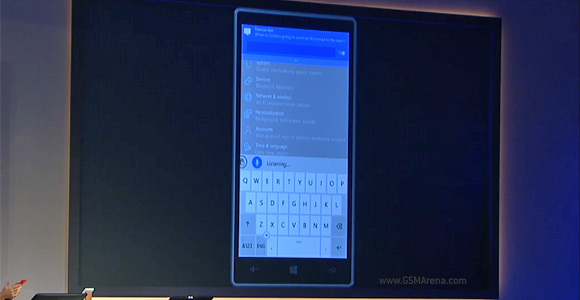 Maps features Cortana integration and the universal app makes it easy to plan a route on a computer and send it to your phone.

Photos is another universal app. It features OneDrive integration and will sync photos from multiple devices, so you can view your entire photo collection from one place. The app will handle duplicates and burst-shots to avoid clutter and automatically group photos in albums. There's also auto-enhance that handles common issues with photos.

As for upgrades, the Nokia Lumia 1520 has been confirmed it will get the upgrade - it was the device used to demo the OS. However, Windows 10 will be a free upgrade for Windows Phone 8.1 users during the first year of availability. That doesn't mean some devices won't be left out though, we're yet to find out the full details.

The first release of Windows for phones will become available in February to members of the Preview program.

Uh...could you please tell me how to rest APN on WP?

Woooow.. I was waiting for this comment from someone, and you have done it SIR.. +1