Multiple sources have reported seeing impressive demos of Windows 8 running on high-profile devices from key manufacturers already and the word is developers are expected to receive a stable build of Windows 8 suitable for ARM architecture come February.

"In October of last year, it [Windows 8 on ARM] scared the industry because it was unstable. But what we are seeing now is quite stable," one industry insider told the team at CNET.

"We haven't heard this directly from Microsoft, but we've heard this from the hardware partners that [Microsoft] is working with. We've been promised something in the February time frame." 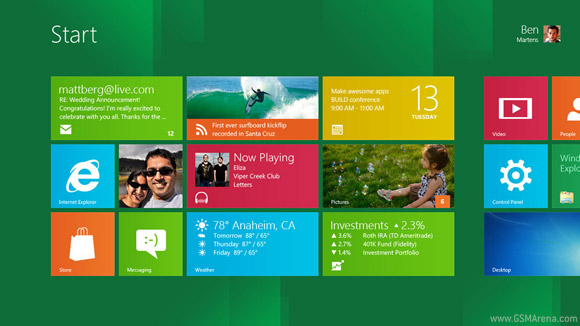 There are a number of key reasons why bringing Windows 8 to ARM is so significant. For one, Windows 8 using ARM architecture would be far less costly than with an Intel equivalent. An Intel-based Windows 8 device showcased at CES this year, would have been considerably cheaper as a cosmetically identical ARM-based unit.

"The bigger implication is, with [Intel-based] ultrabooks you're popularizing the idea that you have this thinner design that turns on faster, that lasts longer [battery life]--but then you have Windows 8 on ARM that's built at a price point that's much lower. And does all of those things too. This is setting up the ultrabook to head right into the teeth of their [ARM] competitor," said the same source.

Despite claims over Windows on ARM coming later to market than Intel, some expect their releases to occur almost simultaneously. The likes of Texas Instruments, Qualcomm and Nvidia are the largest suppliers of ARM chips today and Windows 8 has reportedly been seen running stably on at least two ARM platforms.

With ARM chip designs being the most widely used globally, Windows 8 could be the most significant release of Microsoft's operating system, since Windows 3.0 as it would be able to run across Intel, AMD and ARM architecture.

There are however, some reservations about ARM's readiness to support Windows 8. A question mark still hangs over one important Microsoft application, Office. Despite one person stating that, "Office is fine [on ARM]", we've yet to see any demos or hear anything official from Microsoft on its compatibility.

Intel too are quick to point out the inclusion of legacy applications, one area where their chips still hold the advantage over ARM. One source said "I'm not aware of any third-party legacy applications running on Windows 8 on ARM. Of course, some of the Metro apps that Microsoft has demoed will be available on ARM. These are mostly HTML5 apps," they explained.

Microsoft know they need a diverse library of applications available on any architecture by the time Windows 8 launches officially. This is the reason some think Microsoft are being cautious to demonstrate their next operating system on ARM and why developers are no doubt itching to get their hands on it now.

BC Parallels, and VMware might release an ARM version a few months after receiving a developer ARM Mac Book Air and Windows 7 already has an ARM version.

How do you install it on a arm device?

its support for nokia n8 plz tell me