Windows Marketplace has officially stepped into its next stage of development. There's a new desktop client now and you can buy apps directly from your PC and later install them on your Windows Mobile 6.5 smartphone.

Marketplace support for devices based on WinMo 6.1 and 6.0 is expected later this month. 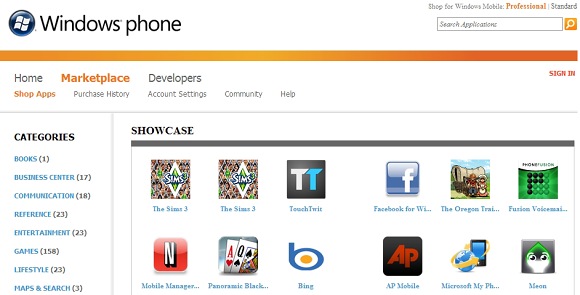 The second Marketplace that has been updated is the anti-piracy measures and while the average users won't feel any changes, the developers will surely be happy there's more protection for their paid apps. If you are a developer you may need to read the anti-piracy whitepaper to understand the new security system.

Microsoft also announced that they will launch the Windows Marketplace for WinMo 6.0 and 6.1 later this month, so those of you with older OS versions won't have to wait long.

Yeah? Just like there are lots of DOS programs nobody uses anymore. No-one comes close to 100,000 Apps, not Symbian or WinMo or anyone else. In 2007 Steve Ballmer stated there were 17,000 WinMo applications, the Symbian Foundation stat...

Hate to step on any toes, but there are FAR more apps available for WinMo then iPhone. What they lack is an official delivery system. Yes the 'appstore' from Apple may have the largest official count of a single source, but developers have been ind...

Haha. You are not talking about pirated apps? What are cracked and bootlegd apps if not pirated? Every product is having its license agreement, that agreement describes what you as 3rd party user can and what can't do with licensed product that you c...