The Windows Mobile 6.5 has been around for less than a month now but Microsoft are already busy preparing an update for it. Good for them as so far nobody is overly excited about their iterative OS upgrade. And from what the leaked screenshots suggest, the next version might actually be good for something.

The new screenshots show that the guys over at Redmond took touch-experience pretty serious this time (yeah, yeah - we know it was about time). The tiny little interface elements that have been around for ages are now replaced with bigger and more thumbable ones. 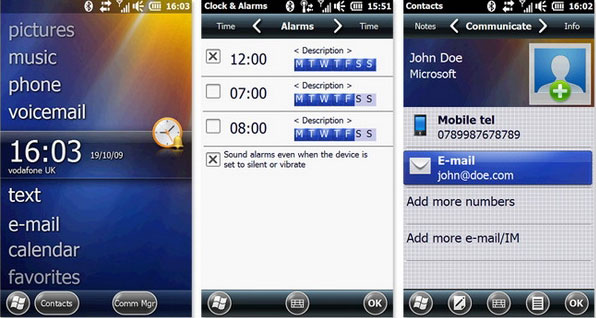 The contacts menu has obviously been completely redesigned and the start menu button is moved to the lower end of the screen rather than the upper. As it seems, the tabbed interface has also been changed with tab indications moved to the top.

This version (be it called 6.5.1 or whatever) is what the 6.5 should have been in the first place. The petty excuse for an upgrade that was presented to us by Microsoft in the beginning of the month hardly delivered on any of the promises made but if any of those mockups are real, things seem to be going in the right direction.

Now what about an official confirmation and some availability terms announcement? With WinMo 7 coming next year it can't be too far away now, can it?

my coment is a good

May anyone please help me a website for the Samsung i900 Omnia firmware upgrade from WinMo 6.1 to 6.5 guys? Thanx in advance.