Microsoft has just launched the first update for the Windows Phone 8.1 Preview for Developers. It's 22MB big and is already available for download via the official over-the-air service. 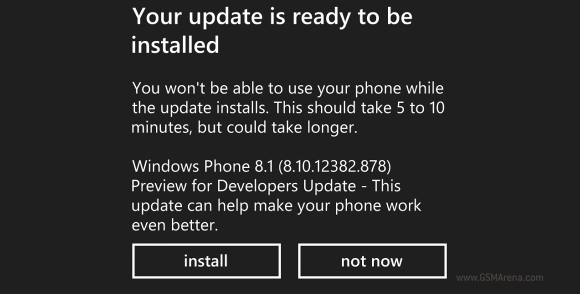 It's a pretty minor and as you've probably guessed it's not bringing any dramatic changes. Squashing a few bugs caused by the migration to Windows Phone 8.1 is its main purpose, but as an added bonus it's also said to improve the battery life.

Having applied the update ourselves we can confirm that the UI looks identical and we can't find any new features to come with it. Do leave us a comment if you have found something that we have missed though.

The Windows Phone 8.1 Preview has been available for a while and everyone can install it as long as they register as developers (you can do that for free via the WP App Studio). However if you have a Lumia smartphone (and chances are high you do if you are in the Microsoft camp), you should keep in mind that it comes without the Nokia Blue enhancements.

We already shared our our impressions in a lengthy Windows Phone 8.1 detailed review. The official and final update will be released on June 24.

yes it is possible to update window 8.1 in nokia lumia 625