Windows Phone 8 to get mass storage and screenshot support 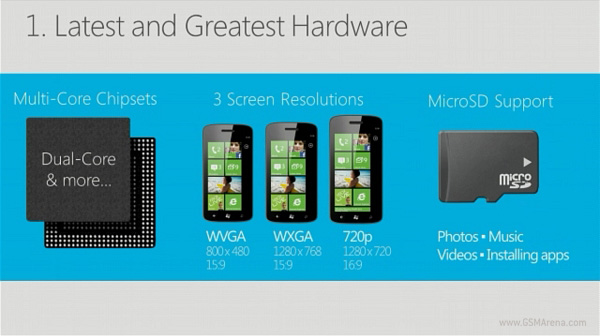 The first is mass storage mode. When Microsoft announced that they were adding support for microSD cards in Windows Phone 8, it was unclear whether they would go with the popular mass storage protocol or the media transfer protocol. Well, it seems they are going with the former, a decision that we applaud.

Next comes the ability to take screenshots. This has been a bugbear with Windows Phone right from the start where if you weren't a developer there was no way to take a screenshot on the device itself. Now we are hearing that Windows Phone will let you grab screenshots by pressing the Windows key and the camera key simultaneously.

Now there is nothing particularly new or exciting about these features. That is, until they are missing. Which is why we are glad to see that Microsoft has added them in Windows Phone 8.

Finally! The only reason I didn't get the Omnia W was the absence of mass storage, Micro SD card support. And having to use Zune to transcode videos. Yuck.

I have a Samsung Focus running Windows Phone 7.5 and it plays Angry Birds and all games with high frame rate and very smooth graphics. Also, never had any crashes. I don't know what kind of make of phone your using but from what I've experienced, ...