T-minus 3 days left for Apple's iPhone event, according to the timer on Apple's website. These last few days before an event is when we get some of the best leaks, and today we have what looks like the actual iPhone 6, or at least one of the two that are going to be announced (the 4.7-inch version). 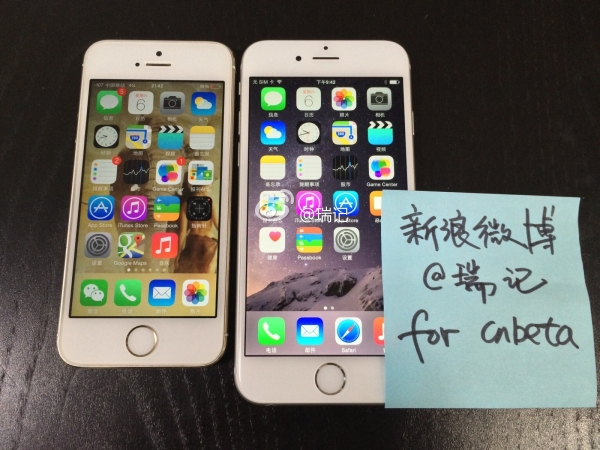 The photographs, taken from Chinese website cnBeta, show a fully assembled and functional iPhone 6. It resembles all the leaks we have seen before. The front looks like a stretched out iPhone 5s. The back has a full metal finish, with strips running around the top and bottom for the antennas. The camera has a raised edge with the dual LED True Tone flash on the side. The sides are curvy, unlike the last four generations and the buttons on the side are now flush with the body.

The device featured here is the silver model, although there will be a gray and gold variant as well.

The homescreen UI is similar to the iPhone 5s, except now there is space for a sixth row. The software on the device is iOS 8, which will come pre-installed.

There is a brief video of the phone, where the person unlocks the device using TouchID. You can watch the video here.

At this point we know pretty much exactly how the phone looks. We'll have to wait for the keynote to find out the actual specifications.

With this hight brightness and sharpness, only think is beacuse have contained remix display screen and that is " IGZO + Retina "

What good is a very good cpu when everything else is mediocre or even worse...iphone is a waste of a very good cpu That is a fact! So no, do not console yourself with imaginary haters... It s just us here, people who make fun out of a pro...