WP7 update for Samsung phones halted due to performance issues

It doesn't matter how minor an update is something may always go wrong. On Monday Microsoft released the first update for their WP7 OS and today they are starting to pull it out due to bricking issues some Samsung devices.

The company found a problem with the update process for Samsung WP7 smartphones causing bricking of handsets after the update. Microsoft assures us that it only affects a small number of handset but it has still stopped seeding the new WP7 revision to Samsung devices and will only resume when the issues have been fixed. 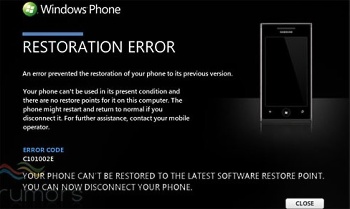 Users who have already went through the update process only to find their handsets unusable after it are advised to take their handsets to the nearest store for exchange.

So, ironically, the update that was meant to polish the update process got pulled out, because of the…well unpolished update process. Let's hope Microsoft quickly finds a workaround to this or else the upcoming major copy-paste update might get delayed even further.

I'm sorry, i dunno if this has been pointed out, but the bricking is not "ironical", it makes sense.