It's not unusual for devs at a conference or competition to walk away with some cool stuff - which is exactly what the winners of the WPAppItUp competition did. They got a brand new HTC Mazaa running Windows Phone 7.5 Mango. And no, you can't have one.

Microsoft said that the Mazaa is a developers phone (think Nokia N950 rather than the Google Nexus phones) and will not be available for sale to general users. That doesn’t necessarily mean we won't get a user version - for example, the HTC Ion given out at Google I/O was merely a reskinned HTC Magic.

And when we say you can't have one, that's not quite true - there was an HTC Mazaa that was auctioned off on eBay (winning bid was $699).

Here are the general specs for the Mazaa - GSM/CDMA dual-mode capable (it's unlocked), powered by Qualcomm MSM8655 Snapdragon (like in HTC Thunderbolt), 5MP camera.

Here are a few more shots of the HTC Mazaa: 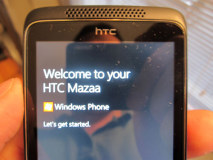 when HTC Mazza phones going to give WP7 winners

Good to hear that, But mostly High-end phone like HTC didn't need to compete with Droid phones, for it provide a unique service and entertainment by its product,, this new phone is marvelous.. great to have it here..

haha nobody knows or cares about nokia and meego