A curious Xiaomi passed through GFXBench – code named Chiron, the mysterious phone has a 5.6” screen with 16.5:9 aspect ratio. That’s quite unusual, the original Mi Mix had a 17:9 screen, the new one is at 18:9.

This device has 1,080 x 1,980px resolution instead – seems just enough to fit on-screen buttons and leave a 16:9 screen behind. But don’t be distracted by the lack of QHD resolution this is a flagship device.

The Xiaomi Chiron has a Snapdragon 835 chipset with 6GB of RAM and a whopping 256GB of built-in storage. This could be the Mi Note 3 that people actually wanted, not the Snapdragon 660 copout. 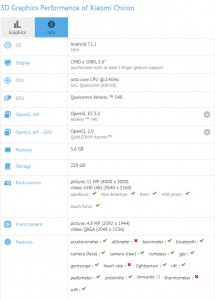 Anyway, the new phone has a 12MP main camera on the back (not quite clear if its single or dual cam) with 4K 2160p video recording. There’s a 5MP selfie cam on the front too.

The Chiron will come out with Android 7.1 Nougat and likely MIUI 9. As you can see, a good deal of that 256GB storage is taken up the Xiaomi’s extensive OS. It's unclear when exactly the Chiron might go official or what its real name will be (Mi 6 Plus, Mi 6c, Redmi Pro 2, we can only guess).

I think this will be the Mi 7. It fits the size perfectly. The Mi6 has a screen diagonal size of around 5.1 inches. If you take the exact phone however, and measure the diagonal of the entire device, while leaving a bit of space above, and a bit more...

5.6" screen is way too small for people needs

The Bugatti....Sorry, Xiami Chiron. The fastest production phone on the planet (if we pretend the iPhone doesn't exist).