We already knew it was coming next month, but didn't have the exact date. Well, that was until now, as it has now been confirmed that Xiaomi's much anticipated Mi 5 flagship smartphone will be made official on February 24, which is around 1.5 years after its predecessor Mi 4 was launched. 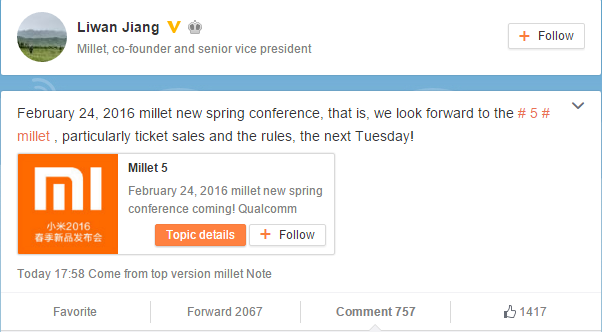 The confirmation came in the form of a Weibo post today from the Chinese company's co-founder and Senior VP Liwan Jiang. He said that the handset will be unveiled at the company’s Spring Conference, which is scheduled for Feb 24. More details about the event will be announced next Tuesday - January 26.

Meanwhile, a leaked Xiaomi presentation slide is doing rounds online (head to the Via 1 link below), revealing that the main launch event will be two hours long (2pm to 4pm). This has led to speculations that multiple devices may be announced during the event, although there's currently no information (not even rumors) of any other device launching alongside the Mi 5.

i am waiting for mi5 but i don't know it's confirms price.

You will probably see Mi5 five to six months from now, or even worse you'll never see one unless you live in China. Remember Mi4 ? It's only found in articles.