Xiaomi is all set to unveil its Mi 5 flagship today in China. If you recall, there have been rumors that the company could announce another device at the event. Looks like now we have some idea on what that device would be.

A leaked poster from Chinese retailer Suning reveals the Xiaomi Mi 4S, and reports say this would be the second device that will be unveiled at the event. 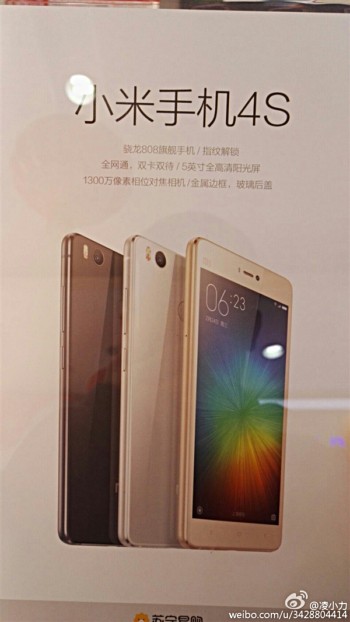 The leak also reveals some of the Mi 4S' specs. It is powered by a Snapdragon 808 chipset and sports a 5-inch full HD display. The handset features a 13MP rear camera with Phase Detection Auto Focus (PDAF) and dual LED flash, as well as a fingerprint sensor at the back.

Needless to say, none of this has been officially confirmed. But that won't take long as the event is set to begin shortly.

Shut Up And Take My Money

Mi 4s would have come with MediaTek SoC lather than Snapdragon